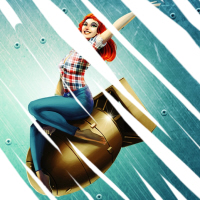 You can avoid reviews all you like - and I try - but sometimes it's hard to miss the consensus about a show, and even before the official reviews came out earlier this week it was clear which way the wind was blowing for Miss Atomic Bomb. So saying anything about it now already feels a bit like kicking a man when he's down, but I'm afraid I won't be going against the flow: Gabriel Vick, Alex Jackson-Long and Adam Long (the latter also co-directing with choreographer Bill Deamer) have assembled an impressive cast for their musical premiere at the St James, but the actors end up looking about as confused about why they're there as the audience do. Lou Lubowitz (Simon Lipkin) is a 1950s Las Vegas hotel manager working for a gangster (David Birrell,) albeit a gangster who doesn't actually seem to have any illegal business beyond running a hotel in an unnecessarily aggressive way.

There are no guests, possibly because they're put off by the corpses of former managers littering the floor, courtesy of an overenthusiastic henchman (Siôn Lloyd,) so Lou is charged with finding a gimmick to attract custom. 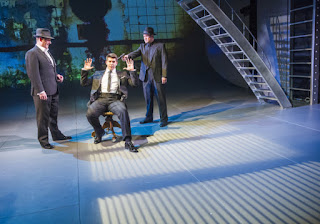 With everyone obsessed with the atomic bomb tests being carried out in the desert, he comes up with the idea of a Miss Atomic Bomb beauty pageant. Meanwhile his soldier brother Joey (Dean John-Wilson) has gone AWOL rather than go into the testing zone as ordered, and is hiding out with Lou. Along his travels he met Candy (Florence Andrews,) a farm girl who's just inherited a lot of debt, whom he's convinced to compete for the cash prize; Candy comes out to Nevada with her friend Myrna (Catherine Tate,) an aspiring fashion designer, and pursued by Mr Potts (Daniel Boys,) a bank manager trying to repossess her mobile home. 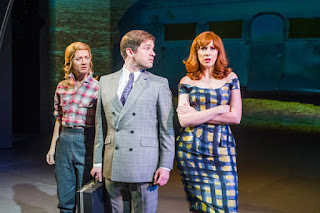 It's hard to actually dislike Miss Atomic Bomb because it's trying so hard. Too hard, probably, as we get attempts at a very silly comedy mixed in with something a bit darker and more irreverent, as nuclear fallout starts killing off first sheep then humans. There's also pastiches of other musicals: Boys' character exists entirely as a spoof of Les Miserables' Javert, a joke that doesn't really land the first time, let alone with every reappearance; see also the word "sheep," which is not, as the script seems convinced, always automatically a punchline. The sad thing is, no matter what kind of joke the writers try, the one thing they have in common is that they're not funny - the theatre was almost full tonight, but apart from one small chuckling group at the back, the audience stared at the stage in mild confusion and stony silence. 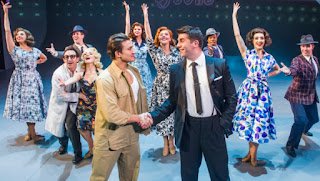 A strong cast seem to be visibly struggling with the material: Lipkin is such a gifted comic actor he can make almost anything funny. I mean, not this, obviously, but he gives it his best try. Maybe he's hampered by not having a puppet to act with, although he does have a lot of scenes with John-Wilson, who has the glassy-eyed stare of a man worried someone from Disney's about to come in and tell him there's been a terrible mistake. The closest thing to a highlight is a late duet between Lipkin and Tate, the only time the latter stops looking as if she's only there because someone's holding her family hostage - I did wonder if the only reason she wanted to do the show (she's even admitted to signing up for it without reading the script first) was to work with Lipkin again. 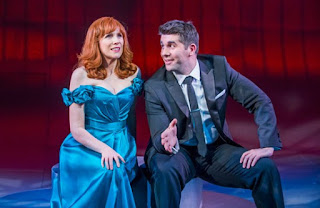 Despite the reliance on pastiching other shows, the songs remain not just forgettable but, for the most part, barely tuneful, and the sound balance doesn't leave many of the lyrics discernible. But however much people grumbled about it at the interval, I couldn't see any new empty seats for the second act: There's a feeling that everyone's heart is in the right place that makes you keep rooting for it to work; it just disappoints you every time.

Miss Atomic Bomb by Adam Long, Gabriel Vick and Alex Jackson-Long is booking until the 9th of April at the St James Theatre.