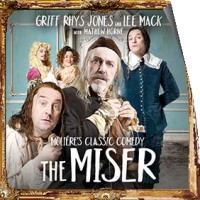 Professional reviewers get most of the perks but there's one reserved for those of us who pay for our tickets: The right to make a run for it at the halfway point without feeling guilty about it*. So I can't call this a review of the whole of Molière's The Miser, loosely adapted by Sean Foley and Phil Porter, and directed by the former. I didn't actually hate it - if I had I'd probably have stuck it out so I could rip it to shreds with all the information to hand - I just knew by the interval that there was little to be gained from sticking around. In a production that appears to have been cast by watching a week's worth of repeats on Dave, Griff Rhys Jones plays the titular Harpagon, whose children won't see a penny while he's alive, which is a problem as they've both fallen for poorer people: Daughter Elise (Katy Wix) loves butler Valere (Matthew Horne) and son Cleante (Ryan Gage) their neighbour Marianne (Ellie White.)

Not only is their father unlikely to approve of the matches, he plans to marry both off to elderly acquaintances as it's likely to add to his coffers. 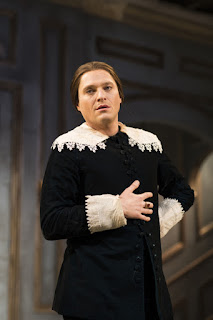 Foley's sure touch with chaotic comedy seems to have abandoned him in the last year or so (or maybe it's just the Garrick that sabotages him.) He made his name as a performer with Morecambe and Wise tribute The Play What I Wrote, and this MIser feels like an extended version of one of their weekly finales; except those lasted a few minutes and this tries to stretch out that style much longer. Blackadder also feels like an overt influence (Gage's Cleante channels Hugh Laurie's Prince Regent, not very successfully,) and Wix and White seem to have been brought in largely to recreate their Fergie and Beatrice from The Windsors. 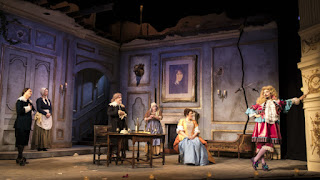 This is a production featuring a lot of performers I like, and it's far from entirely unfunny - I did laugh out loud a couple of times and there's some clever gags. But where throwing absolutely everything at a comedy can be very successful - Mischief Theatre have built a worldwide franchise out of it - there's always the risk of it seeming desperate, which is how it feels here. Along with the decent lines there's forced pratfalls, while anachronistic references to Sports Direct and trickle-down economics that work at first then get hammered home so often they quickly lose their impact. And audience interaction includes scripted "ad-libs" which Lee Mack in particular, as grumpy servant Maitre Jacques, seems desperate to ditch in favour of some actual off-the-cuff lines. The whole thing's just trying too hard meaning the hit rate of attempted laughs to successful ones is poor; we weren't having a bad time as such, but Ian and I both agreed pretty quickly at the interval that there must be better uses of our time than hanging around for more.

The Miser by Molière in a version by Sean Foley and Phil Porter is booking until the 3rd of June at the Garrick Theatre.

*yes, of course there's no shortage of stories of professional critics skipping out on the second act and pretending they saw the whole thing, but they at least ought to feel bad about it.
Posted by nick730 at 21:50