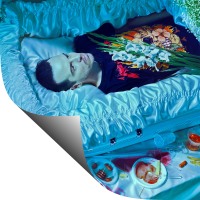 Now a fixture as well as a draw at the Almeida following a number of reinterpretations of foreign classics, Robert Icke turns to English theatre's most famous play; but if the text of Hamlet doesn't need translating, the director still finds ways to edit and reshape it. It's a respectful edit that still feels true to Shakespeare but also opens up plenty of opportunities to look at the story from a different angle and throw up a few surprises even to people familiar with the play (which means once I get into details about the production there will be things that could be considered spoilers, even if you know the story inside and out.) Icke's profile means he can get a big name to take the lead, and indeed the days when Andrew Scott was London theatre's secret are long gone. But for all the fanbase he's built on TV, this proves a reminder that it's on stage that he really shines - and not quite in the way that might have been expected of him.

In video screens that often return to bulk out the action on stage, a Danish news network announces the death of the king, and his brother Claudius' (Angus Wright) assumption of the throne and quick marriage to his widow Gertrude (Juliet Stevenson.) The old king's son Hamlet has returned to the court but, overtaken in the succession by his uncle, has little to do there. 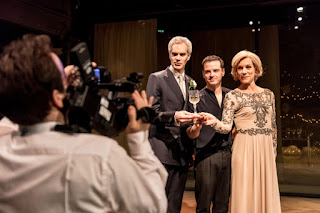 That's until his father's ghost (David Rintoul) appears on the palace's CCTV and gives him a message - that he was in fact murdered by Claudius so he could steal his crown and wife. Hamlet vows revenge but first has to navigate life at the court - usually this now becomes the story of his deliberation and procrastination but in the first of Icke's bold moves the first two-and-a-half acts have been heavily restructured into a part one (of three) that takes place over a continuous 48 hours. So Laertes (Luke Thompson) has barely asked for permission to return to university before he's out the door, Rosencrantz and Guildenstern arrive on the wedding night when the play opens, and after Hamlet's night on watch with the ghost we follow straight on to the diplomatic issues of the next morning. 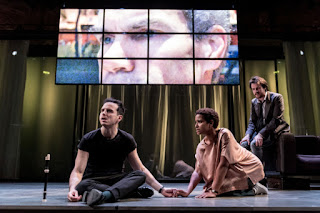 One effect of the editing and moving around of scenes is that even if you've seen Hamlet a couple of dozen times before there's an unpredictability and element of surprise to what will come next; the text reshuffling is sometimes subtle, others fairly drastic, but never messes up the story or, like the now-notorious Betelgeuse Corridor Hamlet, feel as if the speeches are shuffled around arbitrarily. It makes for a Hamlet who's less putting off his revenge, more caught up in events that are rushing towards him faster than he can handle; with that in mind it's not surprising that Scott's is a Hamlet whose madness isn't entirely feigned, even the sheer lack of sleep over the continuous 48 hours the first half covers would be enough to make him start to crack. 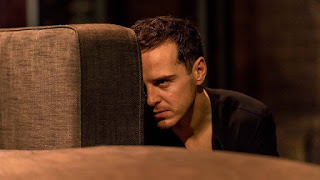 Scott is always a magnetic and very watchable actor, but he's also been known to chew the scenery, so in some ways it's surprising how understated he is here. He really does play the character as increasingly exhausted, the regular reflections on mortality making sense of someone who's pretty much had enough. His opening "Oh that this too too solid flesh would melt" speech has him literally pulling at the flesh of his face, something he'll do to others as well over the course of the play. The climactic fencing match, often done as a big final action sequence, finds him looking like he can barely stand, mirrored by Thompson's Laertes, who looks like he's already regretted the action he's agreed to and it's taken everything out of him. In contrast to these quieter moments, the "How all occasions do inform against me" speech, often played as a moment of quiet determination, is where Scott's Hamlet finally bursts into furious emotion. 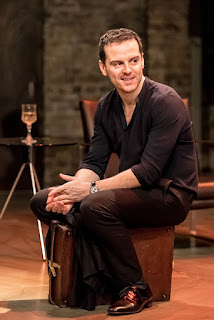 But while Scott doesn't disappoint and ultimately provides a hugely emotional Hamlet - not the funniest ever, but Peter Wight's hugely likeable, bumbling Polonius provides the laughs instead - this is a notable production in the way the lead doesn't overwhelm the play despite the huge percentage of the dialogue he commands. Instead he comfortably fits into a production that in some ways feels like a sequel to the director's 2015 Oresteia: Hildegard Bechtler once again provides a design of sliding glass panels and frequent video interludes, and a number of cast members return, including Jessica Brown Findlay as an Ophelia whose mad scene is similarly understated and heartbreaking. And, like Oresteia, it's a very intimate, family-based look at an epic story. Productions of Hamlet sometimes cut the politics out entirely, something that I've rarely found to really work, but Icke has found a compromise: The politics only intrudes on screen, but the events in the household are all as a consequence of the larger story happening outside. 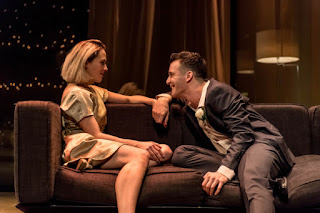 The inventiveness is everywhere, and although the roles of Hamlet's old school friends have been cut down a bit, they've got distinct and complex personalities: Rosencrantz (Calum Finlay) is acidic, sarcastic and distant, aware he's being used but also aware he's unable to say no to Claudius; Guildenstern (Amaka Okafor) here becomes Hamlet's ex-girlfriend, and a more open character who believes they're really trying to help him. In different ways they're both unwilling participants in the plot against the prince, something that's acknowledged: They might still die offstage but in something I've rarely seen their deaths are mourned - when Horatio (Elliot Barnes-Worrell) hears of how casually Hamlet's doomed them to save himself, he's horrified and furious at his friend. 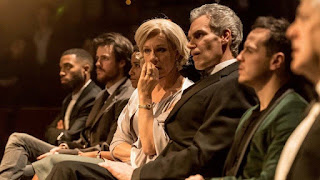 Other innovative staging ideas include Hamlet overhearing both Laertes and Polonius' speeches to Ophelia warning her against him, something that suggests why he might turn so violently against her later on. But probably the most notable change is in the scene of Hamlet considering killing Claudius in the chapel. The king's confession here becomes - SPOILER ALERT! - not a prayer but a speech directly to Hamlet, who's pointing a gun at him. It's the silken-tongued politician looking Hamlet in the eye and undermining his nerve even as he tells him exactly why he should be pulling the trigger. By the end the Bob Dylan songs that have intermittently formed the soundtrack are drowning out the fencing match, and Stevenson's Gertrude - played as genuinely in love with Claudius, unaware of his actions and only near the end starting to realise the truth about him - becomes only the second I've seen who's drunk the wine knowing full well that it's poisoned. 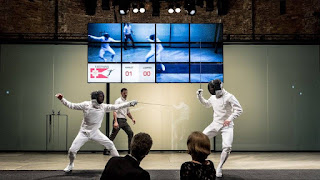 It comes in at almost four hours but the cliché about the time just flying by is true here - I've seen many a two-hour show that felt longer than these four, and if rumours of a transfer are true I'd see it again (though the actors would need to be mic'd up for a larger theatre - my one criticism would be that the director's preference for naturalistic delivery leads to a couple of moments where audibility is a problem.) Icke's been busy since Oresteia and his work has been strong but never quite as sublime and surprising as that - here's a show that's its equal. For the second year running a Hamlet becomes the Shakespeare production to beat, and the fact that it couldn't differ more from last year's excellent RSC production is one of its great joys.

Hamlet by William Shakespeare is booking until the 22nd of April at the Almeida Theatre; returns and day seats only.