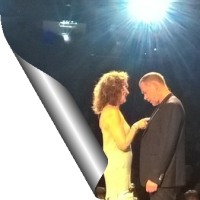 It visited the Barbican several years ago, but now that Ivo van Hove is one of the biggest names in theatre internationally, there's enough of an enthusiastic audience for his work to sell out three more performances of one of his most famous Toneelgroep Amsterdam productions. And it certainly takes a certain amount of confidence in the director to commit to watching Roman Tragedies - it runs for six hours without a conventional interval, and is performed entirely in Dutch (with surtitles.) This promenade production conflates three of Shakespeare's four Roman tragedies - the three that have at least some basis in historical fact, beginning with Coriolanus. This first play is the least connected to the rest of the action, as we skip a couple of centuries forward at the end of it, but it does add a symmetry to the evening: Early on Coriolanus (Gijs Scholten van Aschat) sneers in disgust at the prospect of having to smell the common people if he has to campaign for their votes, a sentiment expressed again almost word for word by Cleopatra (Chris Nietvelt) near the end.

And that's a very appropriate framing for the play, as although those two acts, the first and last, take place with the Barbican Theatre in its usual configuration, everything in between sees the great unwashed cosy up very close to the powerful. 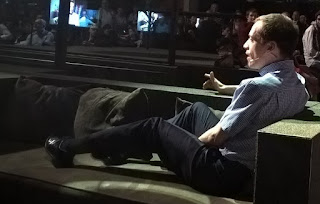 After the first half-hour, in which everyone has been sitting in the seat they paid for, the audience is invited to leave the auditorium and join the actors on stage. Jan Versweyveld's set resembles a modern conference centre, with various open plan booths of couches, TVs and tables. Some of these are reserved for the cast but most are fair game for the audience - you could end up very far from the action, watching everything on one of the screens or, as in the photo above, you could be on the next couch from Eelco Smits' Brutus as he soliloquises. And yes, in keeping with the theme of the common people intruding on the great and powerful, the usual conventions go out of the window: You're actively encouraged to take photos (as long as the flash is off) and livetweet during the show (I was too caught up in the action to do much of the latter.) 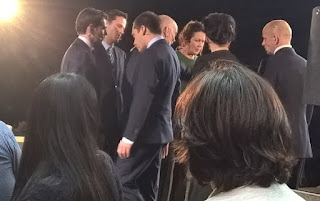 In the absence of a traditional interval, the scene changes become the opportunity for the audience to take a break. There's eight of them, ranging from two-and-a-half to ten minutes, all timed with a countdown on the screen (the influence of not just van Hove in general but this specific show on Robert Icke is clear to see in many ways.) It's an opportunity to move to a new spot (I saw every act from a different location and angle,) pop out to the loo if necessary or get refreshments - there's a bar and a couple of snack bars on stage. If Coriolanus doesn't fit quite that well into the story of the other two, it's ultimately for the best that it's included, as it gives the audience an opportunity to settle into the style of the show before the real intrigue of Julius Caesar begins. And while six hours sounds intimidating, in practice once you've got into the swing of the show you want to get as much as you can out of it. 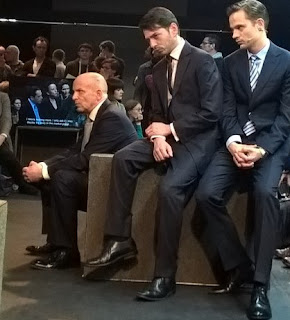 Because this is undoubtedly theatre as Event, but with a killer ensemble doing sterling work to make it more than just that. Not everything works - the least said about "let's have an incestuous lesbian snog here because ??????" the better, and while the setting suits the majority of the plays' theme of men making world-changing decisions in the blandest of surroundings, it can't really portray the decadence of Egypt, whose whole point is the contrast with Rome's regimented order. It falls to Nietvelt to bring all of that herself, which, to be fair, is a task she's well up to, well-aided by Marieke Heebink's gleeful mean-girl Charmian. 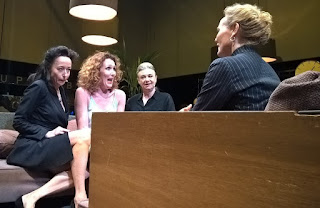 van Hove's tendency to be a bit too clinical for my liking is occasionally here as well, in the bloodless deaths that are done by laying an actor onto a sliding panel to represent that they've died; it's a bit too tidy a depiction of the very real consequences of all this politicking. But if the production lacked fire it turns up in the form of one of the company's long-term stars, Hans Kesting, whose Antony is kept off the stage until halfway through the production, arriving after Caesar's death to tear things up. It's rare to see an Antony who can hold his own against Cleopatra, but Kesting is definitely up to it. 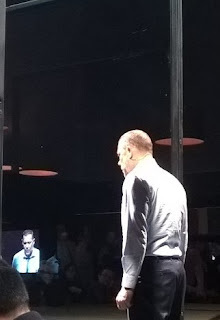 If it's not perfect Roman Tragedies is certainly unforgettable, and the drabness of the surroundings highlights the way certain power plays haven't changed over the millennia, like Antony's "Friends, Romans, Countrymen" speech, in which appealing to the crowd's emotions defeats Brutus' cold reasoning. As sometimes happens, there was even one scene that accidentally ended up being super-topical, as the awkwardness over Thidias (Harm Duco Schut) taking Cleopatra's hand carried echoes of Donald Trump refusing to shake Angela Merkel's (there's also more than a hint of a younger Merkel to Maria Kraakman's gender-swapped Octavius.) In the end there's too much about van Hove's radical reinvention of the plays to go into in anything shorter than a dissertation, but this is an invigorating epic, one that I'd even be willing to revisit in time, giving the lie to what, at first glance, undeniably sounds like a thankless slog*. By the end I felt like I'd sat through an emotionally devastating three-hour show. Which, given it actually runs twice that long, probably says it all.

Roman Tragedies, based on Coriolanus, Julius Caesar and Antony and Cleopatra by William Shakespeare, translated and adapted by Tom Kleijn, Bart van den Eynde, Jan Peter Gerrits and Alexander Schreuder, is booking until the 19th of March at the Barbican Theatre (returns only.)

Photo credit: Me, innit. (If you get bored reading my review, try playing "Spot-the-Jude-Law.")

*the fact that I was going to, let alone looking forward to this has been held up at work as proof that my theatregoing is a form of insanity. I'm not saying that's not accurate, I'm just saying this isn't necessarily the show that proves it.
Posted by nick730 at 23:00