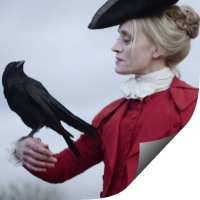 My concerted efforts in the last couple of years to avoid booking for shows I’m not likely to enjoy have been reasonably successful. Failing that, I’ve also let myself feel less self-conscious about leaving at the interval if a show I went for in high hopes turned out to be a dud. So I’m not angry, I’m just disappointed that one of my favourite current playwrights, DC Moore, has choked so badly when let loose on the Olivier stage. His new play for the National and Headlong, Common, is set in the early 18th century, a time when the Enclosures Act took what had until then been common farming land and divided it up into private plots – an early example of privatisation, then. The local Lord (Tim McMullan) is due to start enclosing the land in Hampstead when Mary (Anne-Marie Duff,) who’d left some years earlier and was presumed dead, returns to cause havoc.

Having spent the intervening years as the favourite prostitute of numerous MPs, Mary now cuts a richer and more refined figure than the rest of the town, until she opens her mouth and gleefully swears up a storm. 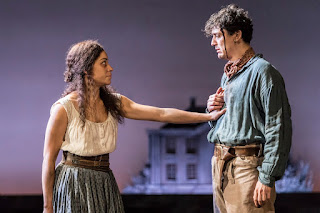 She’s come back to get her adopted sister Laura (Cush Jumbo) to leave with her and get away from the incestuous interest of her brother the Harvest King (John Dagleish.) Mary’s a fake psychic but during the course of the play she starts making real predictions, and she has run-ins with the Lord, his right-hand man Heron (Trevor Fox,) and a group of Irish labourers led by Connor (Ian-Lloyd Anderson.) The play’s an awkward match to the large stage, it’s mostly made up of intimate scenes that feel lost on it, with the occasional Wicker Man scene of a large ensemble celebrating the harvest; Jeremy Herrin’s production doesn’t manage to make either end of the scale interesting (except by accident, like when a part of the set burst into flames slightly before someone set fire to it, and then went back down into the Drum to a chorus of crashes and bangs.) 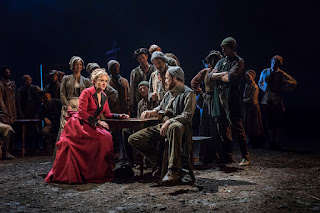 But the biggest problem is in the language, and not just in the swearing-that-thinks-it’s-clever, or jokes so cheesy that kids’ TV would be too embarrassed to use them. Moore is presumably trying for blank verse but has landed on what sounds like English as a foreign language – disjointed, back-to-front, the English more forced than an ABBA lyric and sometimes going full Yoda. It renders it incomprehensible and so painfully dull I’m afraid I can only review the first act – I couldn’t face another hour, and given that there was a busy queue for the cloakroom at the interval I was far from alone.

Common by DC Moore is booking in repertory until the 5th of August at the National Theatre’s Olivier.