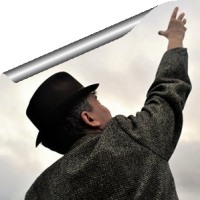 Last year the Finborough’s search for forgotten hits of the past found Scottish playwright James Bridie, whose black comedy Dr Angelus proved well worth another look; now the Sunday-to-Tuesday alternate slot is given up to another of Bridie’s West End hits of the ‘50s, and while Mr Gillie hasn’t stood the test of time anywhere near as well, the amiable little tragicomedy has its moments. Perhaps its most interesting facet is the very premise, which takes a more critical look at a dramatic cliché that’s remained popular long after the play’s 1950 premiere: That of the inspirational teacher who instils an ambition in his students to transcend the limitations they were born into. That’s been Mr Gillie’s (Andy Secombe) aim all his years as headmaster in a small Scottish mining town, and it’s made him much-beloved of his ex-pupils, and hugely unpopular with the school board. And it’s hard not to see the latter’s point, because over the course of his career Gillie has found two students in particular who showed extraordinary talent: Both took his advice to pursue them, and in both cases their lives took such a turn for the worse they’re still spoken of in hushed tones now.

When we meet him Gillie has a new protégé, the miner Tom (Andrew Cazanave Pin,) who shows promise as a poet and playwright, if not enough enthusiasm for Gillie’s favourite classics to stay awake while he reads from them.

Tom has certainly taken something from his teacher’s passion though as he’s secretly married Nelly (Caitlin Fielding) and they’re preparing to run away to London and pursue careers in the arts. It’s not quite what Gillie advised but he supports the move, which only makes him less popular with the authorities, especially Dr Watson (Malcolm Rennie,) who happens to be Nelly’s father. We know these are the last months of Gillie’s life because of a supernatural framing device Bridie has provided: In one of the better moments of dark comedy, the teacher essentially died of Death By Symbolism, run over by the moving van that was coming to evict him; we’re seeing these scenes in flashback as a heavenly court decides whether he deserves an afterlife, or to be consigned to limbo.

It’s a nice idea but an undercooked one, the post-mortem trial scenes feel like an afterthought added to clarify the play’s theme of whether trying to make a contribution to the world is enough, even if it fails completely. Billed as a wry comedy, Mr Gillie errs too much on the wry and not enough on the comedy, particularly in the first act which is far too gentle, and which director Jenny Eastop struggles to find much life in. Admittedly I was very tired at tonight’s performance but the play didn’t do much to liven me up, even with Eastop importing the scenery-chewing Rennie in from Dr Angelus, this time as the whisky-downing doctor*. There’s also a lovely performance from Emma D’Inverno as Gillie’s long-suffering wife, despite her dialogue consisting so much of asking whether people have had their tea that I half-expected her to launch into a game of Sound Charades.

The second act is an improvement as Bridie rediscovers some of that sharp edge when Tom and Nelly return having made a huge success of themselves, but in a much more cynical way than Gillie had envisioned. Fielding in particular turns Nelly into a comic socialite monster, while Cazanave Pin has to balance Tom between a new-found arrogance, and disappointment that his mentor would genuinely have preferred him to fail and starve on a principle, than schmooze his way into a dream job. Like the play itself, the performances are decidedly mixed, and there are moments that stand out as still interesting while much of the play creaks with age. In the end, much like the character it’s named after, Mr Gillie is well-meaning but doesn’t make the intended impact.

Mr Gillie by James Bridie is booking in repertory until the 11th of July at the Finborough Theatre.

*all doctors in plays are functioning alcoholics, I blame Chekhov
Posted by nick730 at 23:28