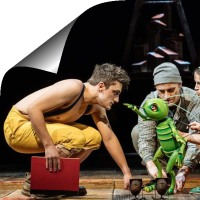 Going by the last couple of offerings, Rufus Norris' vision for Christmas family shows at the National involves the most familiar stories being given unfamiliar stagings. If I wasn't really sold on a vision of Peter Pan as "quite looking forward to getting his bus pass," this year's interpretation of Pinocchio as "Joe Idris-Roberts with his nips out" is perhaps a more likely fit to my interests. And the story itself, a pretty dark one at heart and much less frequently staged, is closer to my liking of the more gothic side of children's stories. Adaptor Dennis Kelly and director John Tiffany certainly seem to agree, with a disorientating production: This saw me return to the theatre after a few days of being too ill to go out and having to miss some shows I was really keen on, and perhaps there could be no better fit when I'm still feeling a bit wobbly, as Pinocchio has always had a touch of the fever-dream to it.

Elderly, childless widower Geppetto (Mark Hadfield) has a puppet-making workshop, talking to his creations like they're the only children he'll ever have. The Blue Fairy (Annette McLaughlin) has a way of making that truer than he expects. 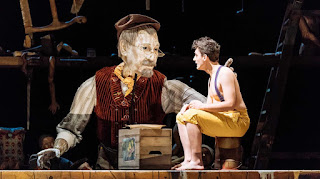 She commissions him to make a puppet out of an enchanted piece of wood she gives him, and even before it's completed Pinocchio starts taking back to him. But the living puppet is pure Id, utterly selfish and focused on the next thing he wants, which not only hurts those around him but also keeps putting him in danger. Seeing he has no conscience of his own, the Blue Fairy creates an external one for him in Audrey Brisson's Jiminy Cricket. She is the good influence fighting for Pinocchio against the bad influence of the Fox. 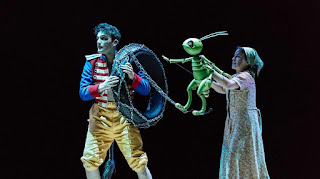 David Langham as the Fox makes an eerily tall and thin, gleeful villain of the piece, and the play opens with the striking visual of him cutting down the enchanted tree in the snow before the Blue Fairy manages to salvage what's left of it. Bob Crowley's designs are one of the most memorable aspects of the production, especially the puppets he's co-created with Toby Olié. This includes the notable decision to swap round the human and puppet characters so the life-size Idris-Roberts is dwarfed by a giant Gepetto and, later, the villainous Stromboli (Gershwin Eustache Jnr) and Coachman (David Kirkbride.) 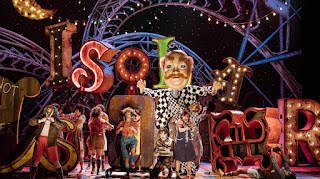 One of the most controversial elements when this production was announced was the National partnering with DisneyTM to present a new version of the story but with familiar songs from the 1940 film. It makes for an odd choice because much-loved they may be, but in this context they really stand out as dated and twee. To my mind they're a miscalculation but they don't derail the production, which at least is odd enough anyway that it can handle the awkward changes in tone. 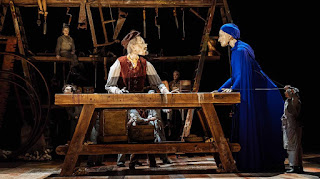 The metaphorical darkness also means lighting designer Paule Constable can provide plenty of the literal kind, making the stage magic very effective - even from the fourth row of the stalls you can't always see the wires. The flying blue flame that represents the Blue Fairy in flight got gasps every time, and they even managed to get a part of Pinocchio's anatomy to get bigger before your very eyes, although despite the production's innovations it's still traditional enough that it was his nose. 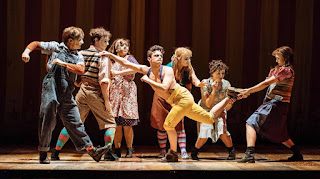 Kelly, Tiffany and co haven't gone so dark that they alienated the target audience - there were plenty of kids in and they seemed enchanted - but it also embraces the story's identity as a cautionary morality tale, and Idris-Roberts manages well with an initially unsympathetic lead who finds his humanity in more senses than one (although he's probably looking forward to playing an adult human with bodily hair again, the shaving rash on his legs looked nasty.) With its disparate ways of telling the same story never quite holding together this is undoubtedly a strange show, but the kind of strangeness I can get behind.

Pinocchio by Dennis Kelly, based on the novel by Carlo Collodi, is booking in repertory until the 10th of April at the National Theatre's Lyttelton.

Rufus Norris is the intellectual property of the Walt Disney Company. He is entirely fictional, and any resemblance to any person living or dead is entirely accidental.