PREVIEW DISCLAIMER: Although tonight's performance wasn't due to be a preview when I booked it, the repair works on the Victoria Palace overrunning meant the press night was put back*. 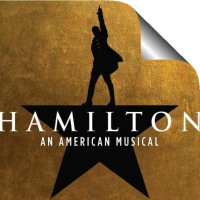 If there was any doubt that the people I work with aren't really theatre fans, Exhibit A: When they asked me what I was doing for my birthday and I said I was going to Hamilton they said "what, in Scotland?" Outside of my office, though, excitement over Lin-Manuel Miranda's latest musical seems to be at fever pitch. Quite apart from all the awards it's been the hottest ticket on Broadway since it opened, and its (slightly delayed) London opening more or less sold out instantly. I'd deliberately avoided listening to any of the songs so it could stand on its own, but it was clear that even on its third public performance the theatre was full of people familiar with the score and enthusiastic for Miranda's high-speed history lesson about America's founding fathers and particularly Alexander Hamilton (Jamael Westman,) who appears on the $10 note but is otherwise comparatively obscure.

Born in the Caribbean, and after a childhood so tragic it would have Charles Dickens thinking it was laying it on a bit thick, Hamilton immigrated to New York and became a driving force in the War of Independence, and private secretary to George Washington (Obioma Ugoala.) 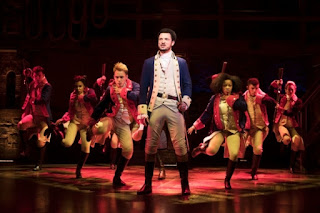 The first act speeds us through the revolution itself, as well as Hamilton's whirlwind courtship and marriage to Eliza (Rachelle Ann Go,) the middle of the eligible Schuyler sisters; a relationship fostered by oldest sister Angelica (Rachel John) despite the fact that she loved him herself, and remained a long-distance advisor to him for most of his life. The second act suggests that the hard part came after they'd won the war; during Washington's presidency Hamilton becomes instrumental in developing much of the way America's governed, especially financially‡. He also has to deal with the arrival of a political opposition in the form of the pro-slavery Virginians, led by Jason Pennycooke's diminutive, scene-stealingly flamboyant Jefferson. 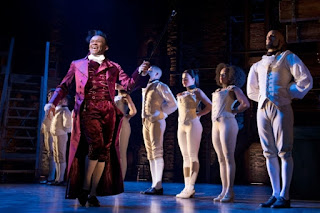 I was a big fan of Miranda's earlier show In The Heights, and the mix of hip-hop and latin musical styles carries through to his latest show, although despite the deliberate contrast between subject matter and presentation Hamilton's structure actually feels the more traditional piece of musical theatre: It's through-sung (or rapped) and there's a lot more recurring melodies and character themes, fewer of In The Heights' standalone numbers. It's still insanely catchy though, from the already-legendary opening number "Alexander Hamilton" to the '60s-pop numbers of Michael Jibson's comic relief George III. 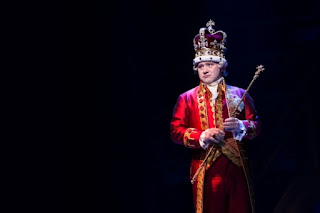 On top of Miranda's musical itself though there's Thomas Kail's beautifully-staged production, Andy Blankenbuehler's energetic choreography throwing the cast all around the wooden walkways of David Korins' design, and Paul Tazewell's costumes wittily turning 18th century fashions into something suited to high-powered Broadway dance numbers. And Howell Binkley's lighting seems likely to be high on the awards lists, making a tangible contribution to the show's personality. 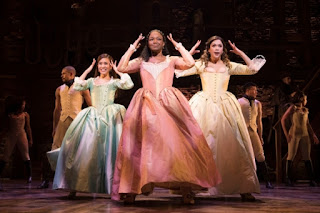 Miranda has hinted he'd like to reprise the lead in London at some point but wanted an all-British cast to open the show, and they fit in perfectly - in fact my sister assumed they'd shipped in an entire Broadway cast until told otherwise. Westman's confidence and stage presence give no hint of the fact that this is only his third professional role, and his first in a theatre anything like this size. John is also a highlight as Angelica, a steady female voice of sense among flaring masculine passions, but it falls to Giles Terera to hold the whole thing together as Hamilton's nemesis Aaron Burr, perenially just that little bit on the sidelines of the action, and eventually unable to forgive Hamilton for blowing his one chance at claiming the spotlight. 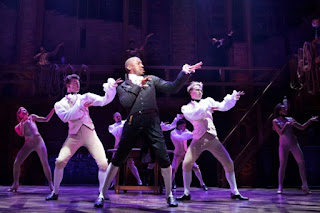 Trying to write about Hamilton feels slightly pointless when it's already a worldwide phenomenon, that in its third public performance was already full of people who knew every word. Its timing couldn't have been better, its message about how immigrants have shaped America coming when it most needed reminding, and its sell-out success months before it even opened means it hardly needs my endorsement. With the amount of hype behind it it maybe could never have lived up to it entirely but it comes close - I don't know that I loved it as instantly as In The Heights and it feels maybe twenty minutes too long, but it's definitely another cast recording I'll be downloading. And as for the UK cast, there's nothing to betray the fact that they haven't been doing this for long in front of an audience - not that they need the critics' help but they're ready for them.

Hamilton by Lin-Manuel Miranda, based on Alexander Hamilton by Ron Chernow, is booking until the 30th of June at the Victoria Palace Theatre.

*as previews are priced slightly cheaper, Delfont Mackintosh refunded the difference. Which you'd think would go without saying, but it's amazing how often theatres decide a show isn't ready for the critics yet, but is ready for regular audiences to pay full whack.

‡he also came up with the Electoral College system, but they don't really mention that - I mean you're meant to have some sympathy for your protagonist, even if he is a complex character
Posted by nick730 at 23:37