Theatre review: The Passing of the Third Floor Back 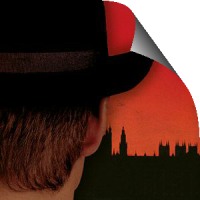 As you might be able to infer from my photo, I’m quite partial to a cheeseburger. Although it would presumably be pretty synonymous with an instant heart attack, I can’t say I haven’t been tempted by Byron’s Christmas Fromagemas burger this year, featuring four different types of cheese as well as a jug of cheese sauce to pour over your cheese in case your cheese wasn’t cheesy enough. If all this indulgence seems like a particularly 21st century type of excess, I would have to point out that 110 years ago West End audiences made a hit of Jerome K. Jerome’s The Passing of the Third Floor Back, a play featuring toxic levels of cheese they presumably couldn’t get enough of. Mrs Sharpe (Anna Mottram) runs a London boarding house for what she considers to be a better class of clientele, but everyone there is miserable and trying to get one over on each other.

Mrs Sharpe waters down the milk and tries to pass off cold tea as whiskey, while her boarders steal her candles and try to argue down their bills; in the common areas they smile to each other’s faces and gossip behind each other’s backs. 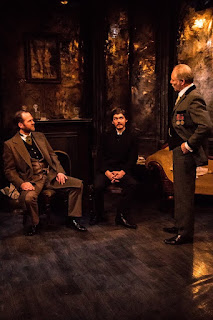 They’ve been having trouble letting out the unappealing third floor back bedroom until maid Stasia (Ella Dunlop) goes against orders and puts an advert in the window; this quickly brings in a Stranger (Alexander Knox,) whom everyone is suspicious of on first meeting, but who gets each of them one-to-one and proves supernaturally charming. After a first act introducing the boarders and their hangups, the second sees Aslan The Stranger pinpoint the source of everyone’s unhappiness and gently guide them in the right direction. The conclusion picks up the story a little later when the fruits of his labours have resulted in a happier house. 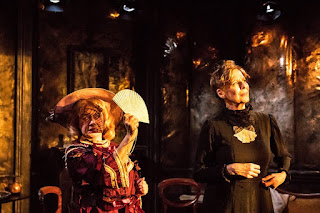 Jonny Kelly’s production does its best to keep an air of mystery and magic (although I could have done without the near-constant harp accompaniment.) Jasmine Swan’s design covers the walls in bronze mirrors that make for a gloomy atmosphere evocative of the fog that’s regularly referred to and rarely lifts – a few of the guests have started feeling uncomfortable when the sun breaks through because they’re so unused to it. The interval comes early, about 35 minutes into the 2-hour show, at the end of the first act and at this point Kelly’s production makes the play look like it has promise: Having established the characters, The Stranger instantly charms Mrs Sharpe and Stasia, his seemingly hypnotic ability opening up intrigue over whether he’s really supernatural, and whether his motivations are good or bad. 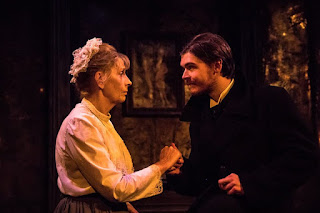 Unfortunately this question mark doesn’t last long into the second act, as his initially cryptic intentions quickly resolve themselves into low-key miracles. The large collection of characters here becomes a problem, as once it’s become clear who he is (in case it was too subtle, Jerome eventually has him start talking about kings born is stables,) we have to get through him dealing with each resident individually, long after any sense of unpredictability has fizzled out; and then we have to plough through them all again as the third act shows us how he’s improved their lives. There’s some moments that stick out – the grotesque Miss Kite (Paddy Navin) learning how to ditch the inch-thick make-up and age gracefully has a nice touch of vulnerability to it, while Dunlop has a bright-eyed innocence that makes the maid the most likeable character. But while I don’t necessarily object to the play turning out to be a Christian allegory, I do have a problem with how heavy-handed and syrupy it is, and Jerome ditching any attempt at unpredictability makes this a slog.

The Passing of the Third Floor Back by Jerome K. Jerome is booking until the 22nd of December at the Finborough Theatre.