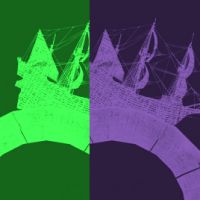 After a turbulent couple of years for the venue, Michelle Terry has now officially taken over as Artistic Director of Shakespeare's Globe, and next week I'll be making my first trip to her summer season proper. But first, as well as any innovations of her own she might have planned, there were a couple of Globe favourites that had fallen by the wayside during the Emma Rice years that I'd hoped to see return; I'm still keeping my fingers crossed that Globe To Globe will be back in future years but in the meantime the "tiny" touring shows - small casts of actor-musicians frantically doubling all the roles in some of Shakespeare's best-known plays - are back, but with a twist that's Terry's own: Brendan O'Hea directs a cast of eight in three plays; once the company hits the road they won't know which play they're going to perform until the last minute, leaving it to an audience vote to decide the night's entertainment.

I’m hoping to catch two of these shows at the Globe before they set off on tour, and the third in the autumn when they return; first up is the one I suspect will win most of those audience votes, Twelfth Night.

Twins Viola (Steffan Cennydd) and Sebastian (Jacqueline Phillps) have both been washed up on the shore of Illyria after a shipwreck, and each assumes the other to be dead. Viola dresses as a man to get a job serving Duke Orsino (Rhianna McGreevy,) and is sent as an emissary to woo the Countess Olivia (Cynthia Emeagi.) Olivia is in mourning, and uses this as an excuse to rebuff Orsino’s advances, but when she sees Viola she falls for “him” instantly. One thing that’s been clear about Terry’s vision for the Globe even before the season opened is that she’s even more committed to gender-fluid casting than her predecessor, and the tiny tours with the multiple doubling are a good place to do this casually – perhaps too casually, as it was only from the pronouns that I could tell we weren’t getting lesbian Orsino (which would be a whole other interesting spin on things.)

I don’t really like seeing shows too early in their run – I think it’s unfair to try and review them before they’ve bedded in – and I wouldn’t have ended up seeing the first public performance if it weren’t for the very limited number of performances where the play is known in advance. Certainly I thought the cast were good, but will be better once they’ve played in front of audiences a few times and relaxed into the idea of interacting and playing with the crowd. Russell Layton’s Sir Toby has some good rapport with the groundlings, particularly the drunker his character gets, but by far the funniest performance of the night right now comes from Sarah Finigan as Sir Andrew Aguecheek, absolutely nailing his ridiculousness and tendency to announce insults he’s been paid in the past under the impression they’re compliments. The disastrous duel with Viola, which can often feel like filler, is here the comic highlight of the night.

Luke Brady’s Feste is also funny, somewhat unusually for a character generally seen as melancholy and past his best fooling days. With an edited text and a small company rehearsing multiple plays simultaneously I didn’t particularly expect a high concept take on the play, and O’Hea’s production is focused on telling the story clearly and entertainingly. Colm Gormley’s Malvolio is perhaps a bit underexplored – there’s not much mean-spiritedness to him, so little sense of why the household take against him so violently, and the whole Malvolio subplot is strangely low-key at the moment. But that’s the sort of thing that could well come from more performances with audiences; for a first outing this is looking solid, with a sense of fun that can only build.

Twelfth Night by William Shakespeare is booking in repertory until the 6th of September at Shakespeare’s Globe; and touring (subject to audience vote) between the 25th of May and the 18th of August to Chilham, Bangor, Bilbao, Avilés, Madrid, Neuss, Petronell-Carnuntum, Richmond (Yorkshire,) Brighton, Oxford, Lincoln, Alnwick and Ystad.