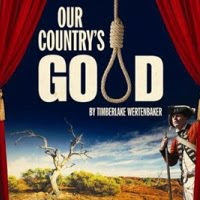 Timberlake Wertenbaker's versions of Greek tragedy are among my favourites (I think she strikes a good balance between being true to the genre and clear, unpretentious writing) but I hadn't seen any of her own original work. Now her best-known play, Our Country's Good, gets a touring production and it's well-timed as well, since it coincides with the Donmar's revival of The Recruiting Officer, a play that features heavily in this one. Captain Arthur Phillip (Aden Gillet) is governor of the newly-established Sydney, New South Wales. He presides over the soldiers guarding prisoners who've been transported to Australia for crimes big or small back in England. After a traumatic 8-month sea voyage, the convicts are desperate and their lives chaotic, the soldiers take out their own frustrations on them, and Phillip wishes they could start anew without the brutal whippings and hangings that are a daily feature. When he suggests putting on a play might have a civilising effect, 2nd Lieutenant Ralph Clark thinks volunteering to direct it might help his chances of promotion, and The Recruiting Officer is chosen.

With a large amount of characters for a touring company, Alastair Whatley's production has to double the cast quite a lot, which is done effectively enough (Jan admitted it took him ages to realise the bad-guy major and the repentant hangman were both played by Adam Best; who in the latter role gets spat on enough for a full season at the RSC) but does contribute to the play taking a while to warm up. Once it does though there's a lot to enjoy here in a multilayered story that mirrors the governor's hope that theatre will bring some humanity to people used to being treated as animals, and sees a group of unlikeable characters become a company you root for. The story takes a nasty turn when Liz (Emma Gregory,) one of the convicts-turned-actors, is accused of stealing food and faces the noose.

As Jan came with me to The Recruiting Officer I offered him this as well, and although Our Country's Good doesn't require knowledge of the Farquhar play, it does of course add another interesting angle to this very different companion piece. There's a good mix of comedy and pathos, with an edge of social commentary. It's not perfect - a romance between Ralph and his leading lady is underdeveloped, and the occasional appearances of an Aboriginal man (Seun Shote) feel like they're only there to avoid accusations of forgetting about the local people whose land has been invaded. But overall this is well-written and acted, thought-provoking and entertaining.

Our Country's Good by Timberlake Wertenbaker is booking until the 31st of March at Greenwich Theatre; then continuing on tour to Llandudno, Eastbourne, Bracknell and Finchley.