Theatre/Dance review: Can We Talk About This? 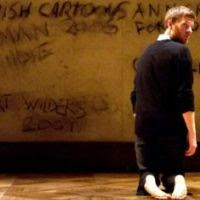 Spending a couple of weeks at the Lyttelton after a world tour, physical theatre company DV8 go for a deliberately controversial subject matter in Can We Talk About This? The theme is Islamic extremism, and in particular the harsh reprisals faced by numerous people who've publicly criticised or spoken out about Islam over the years. The rough starting point is the fatwa against Salman Rushdie over The Satanic Verses, probably the first time most people in this country became aware of Muslim extremism, Sharia Law and its demands for execution of anyone who speaks out against its teachings. The spoken element mainly consists of a verbatim play spoken by the performers, although there's also recordings of actual speeches, and radio and TV debates (meaning Jeremy Paxman gets to steal the show without having to enter the building.) All of this is combined with the performers' abrupt, jerky dance movements.

The set (designed by Anna Fleischle) is a grimy institutional space like a schoolroom, whose walls close in very slowly over the course of the performance, and are written on by the cast. The show is interesting throughout although I was never quite convinced the format matched the subject that well. I'm also not sure how much we really got from it. DV8's conclusions certainly provide food for thought about the way certain authorities have suppressed others' free speech for fear of Muslim reprisals; and there's a focus on the way Muslim women are often then biggest victims of attempts to "respect" their culture. The play also comes down hard on the idea of multiculturalism, arguing that it should respect the believer over the belief, but ends up doing the opposite. But although the odd moderate Muslim voice is heard, I felt as if the show avoided the difficult issue of reconciling the extremists with the way most Muslims go about their lives. And after all Islam is hardly the only religion whose teachings, if taken strictly literally, have hateful consequences.

Can We Talk About This? is a show that goes all out to be seen as taboo-busting and court controversy, which left me with the uncomfortable feeling of the show not being complete without finding out if DV8 themselves face real-life threats, since their argument would suggest this is inevitable. There is a palpable tension in the audience that would be there even without a gimmick, which I'll spoil in the next paragraph (but which whatsonstage.com's review spoiled on the front page of the website - it wasn't even a Coveney review, I mean is that just what they do now?)

SPOILER: Near the end of the play a man runs into the stalls, shouts out that the show is "Islamophobic shit" and throws something turd-like on the stage. Not that the show overall is subtle, but this extra shock tactic wasn't needed. It's not that convincing anyway since they've dressed the actor as the stereotype of a terrorist, and the script then goes straight on to talk about excrement being thrown at a shelter for abused Muslim women. Unfortunately tonight the actor's aim was a bit off. So after all his ranting in the show, right after the bows the actor ran back into the audience to apologise profusely to the woman he'd accidentally hit in the head with a turd, and to assure her it was actually peanut butter.

Can We Talk About This? by Lloyd Newson is booking until the 28th of March at the National Theatre's Lyttelton.