Theatre review: Goodbye To All That 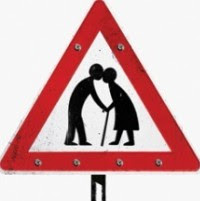 It's déjà vu time at the Royal Court where I was for the second night in a row: Although this time in the Upstairs theatre, we're still in Essex (Romford this time) and there's another hospital bed on stage. I was also accompanied by Ian for the second night running, because Goodbye To All That is the playwrighting debut of actor Luke Norris, and Ian wanted to know if he's as good at writing as he is at being on stage in just his underpants. This is the opening play in this year's Royal Court Young Writers' Festival but, inspired by the fact that at 25 it was the last year he was young enough to qualify, Norris has written a play concerned with ageing. Frank (Roger Sloman) is nearly 70 and is confronted at the golf club by grandson David (Alexander Cobb) whom he and his wife have raised. David has his A'level results but this isn't the main thing he wants to talk about: He's spotted his grandfather with Rita (Linda Marlowe,) a woman who isn't his grandmother.

Goodbye To All That doesn't start that encouragingly with a series of short scenes in which Frank meets one-to-one with David, Rita and his wife Iris (Susan Brown,) in sequence. About a third of the way in though the story takes a different turn and the play improves as well. Though the initial themes of a man discovering love late in life, and of exactly what love and its expressions actually mean, are still at its heart, they're looked at in a more poignant context. Iris is probably the most interesting character, though not actually unsympathetic she does demonstrate a hardness and cruelty that singles her out from the other more emotionally open characters. And in a way the unpromising start (Ian said afterwards that he really hated the opening scenes; I wouldn't go that far but I was certainly wondering how the hell these characters were supposed to sustain an hour and a quarter) means the improvements are felt more strongly. The cast is good so seeing them gradually share more stage time all together in particular brings its own rewards.

Tom Piper's set is an odd mix of the very detailed (the walls and floor of the theatre are decorated in a chintzy style that immediately makes the audience feel they've walked into the world of a group of pensioners - Norris' reference to Iris' choice of biscuits is similarly well-observed) and a much plainer central playing area that accommodates the frequent scene changes. Overall I found the design worked rather well. As a whole the play does betray the writer's inexperience but some moments are genuinely affecting so he does show promise.

Tonight was a post-show discussion night, with the cast, Norris (who, for the benefit of certain people reading this, has Sad EyesTM; and currently a beard, which I didn't mind but Ian disapproved of) and director Simon Godwin - which is where I got the titbit about Norris getting the idea when he realised he was about to no longer be "officially" young. It's interesting that the audience seem to have taken a variety of different things from the play's ending; I think my interpretation was a bit less sympathetic to Iris' actions than some people's. And ironically enough given one of the play's themes was that getting older doesn't necessarily mean getting wiser, Alexander Cobb who's fresh out of drama school, found that the problems he sometimes encounters in rehearsal still trouble his much more experienced co-stars just as much, and he can't look forward to getting all the answers with experience.

Goodbye To All That by Luke Norris is booking until the 17th of March at the Royal Court's Jerwood Theatre Upstairs (returns and day seats only.)