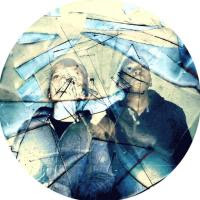 The second in this year's Philip Ridley-fest (so far, four of his plays are in, or will be coming to, London,) and after a revival of his first play it's the premiere of his latest work, Shivered. Straying for once from the East End, Ridley takes us to an Essex new-town, built largely to accommodate a Japanese car manufacturer, who then upped sticks a couple of years later. Two families form the core of the story: Lyn (Olivia Poulet) and Mikey (Simon Lenagan) whose grown-up son Alec (Robbie Jarvis) is in the Army, and whose younger son Ryan (Joseph Drake) was born with a deformity they blame on the car plant; and morbidly obese single mother Evie (Amanda Daniels,) a phoney psychic whose son Jack (Josh Williams) is regularly, viciously beaten by a gang of local bullies. The families are linked by the friendship between the two 12-year-olds, and by Gordy (Andrew Hawley,) a charismatic fairground worker with a thing for older women.

Beyond that there's little I can say about the story without giving too much away, especially as the scenes are performed out of sequence and piecing together the whole picture is part of the show's appeal. At the story's heart and extending out through the scenes like a spider's web is one absolutely horrific event, whose nature is revealed early on. The scenes that take place after it are largely in consequence of this, and in those that take place earlier we have the benefit of hindsight to see what leads up to it, and the knowledge of what fate awaits one of the characters. Over the course of the play there's a couple of other brutal incidents yet as is always the case with Ridley, his work maintains a positivity and sense of wonder that means it's a world away from misery porn.

Shivered covers all sorts of different themes, but warns us not to look for connections and patterns where there are none. So the horrors of war can have a catastrophic effect on a man's mind; but miles away, similar real-life horrors are being watched on the internet for fun, and a child is desensitised to the point of callousness. Monsters are a recurring theme, whether the aliens that Ryan is obsessed with or the very real human versions. And Shivered's world is one of miracles, even if they do mostly turn out to be fake. This is on the more realistic end of the scale for Ridley, but as ever a fantasy world lurks in the language (which once again features some vivid imagery, most notably in Mikey's devastating speech near the end) and Rob also spotted one recurring theme I hadn't, the repeated references to chocolate, linking right back to The Pitchfork Disney.

Russell Bolam's production is blessed with an excellent cast who help create what is ultimately also an incredibly gripping and entertaining evening out of themes that could have been pure darkness. Drake is heartbreaking at times but at others has a hilariously real relationship with Williams' Jack, the latter having to portray very different parts of his character's life. Robbie Jarvis similarly has to give us Alec in a couple of hugely contrasting mental states, to devastating effect (he's also a really cute blond, which doesn't hurt.) Actually the whole cast is required to turn on a sixpence as the out-of-sequence storytelling takes us from their finest hours to their darkest and back again, and yet they never feel inconsistent. Poulet has some of the darkest moments of the play but also brings humour, while Daniels is often hilarious as the painfully transparent fake psychic. Much of the first act, meanwhile, is stolen by Hawley, whose good looks, energy and rakish charm make him perfect casting for the snake-oil salesman.

Designer Anthony Lamble has kept things simple, with Richard Howell's lighting similarly unfussy but subtly adding tons to the overall effect. Of the Philip Ridley plays I've seen, Shivered is the most ambitious in its scope and in its storytelling technique, a story that he deliberately shatters in order to reassemble it into something new and strangely beautiful; but it retains the writer's strong identity and the best elements of his other work. On the train home it occurred to me that I could have quite happily gone straight back in and watched it again.

Shivered by Philip Ridley is booking until the 14th of April at Southwark Playhouse.