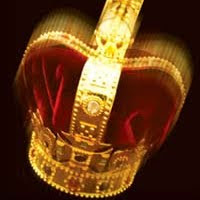 Howard Brenton's run of historical/political plays continues with a look at the English Civil War, and the 55 Days leading up to Charles I's execution. Hampstead Theatre's main house has been configured in traverse for the clash between Charles (Mark Gatiss) and Oliver Cromwell (Douglas Henshall,) the man who would go on to lead the country's brief period as a republic. Cromwell speaks of the power of the people but right from the start this is a story of rules being bent, broken and rewritten completely to get the desired result. When Parliament votes overwhelmingly against putting the king on trial for treason, the republican-leaning army "purges" the Commons by getting rid of all the MPs who voted in Charles' favour.

Ashley Martin-Davis' designs range from the Second World War to the present day, with a feel of Churchill's war rooms to the set. Only the king himself is fully decked out in seventeenth-century finery, highlighting even further how much of a relic he is compared to the men he's up against. 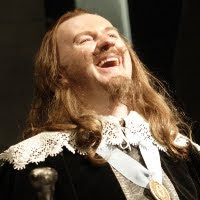 There's a large cast (if you get your choice of seat when booking you may want to avoid the front two rows on both sides, as the way the trial scene is staged could impact on your view; we were in the third row so had no problems) but essentially this comes down to two opposed - but not necessarily as different as they probably like to think - men. Both are slippery characters more formidable than they appear on first impressions, and both have the absolute conviction that they are directly appointed by god. Charles is of course the anointed head of the Church of England, utterly confident in his own right to rule, and still threatening to see his enemies hang even as it becomes unavoidably clear that he's the one who'll meet a sticky end. Especially in the first half of the play, Brenton rations the king's appearances, giving us occasional glimpses into the man the rest of the characters are trying to bring down, and Gatiss is an obvious match for the role, relishing both the unashamed flamboyance and the scheming that it disguises. 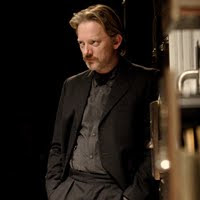 If anything, Henshall's Cromwell is an even harder character to get to grips with, the thoughtful, conflicted man we first meet at odds with the "General Ironsides" who's already become a name to be spoken in hushed tones. But for all his protestations Cromwell seems constantly to be in the centre of the big events, with power gravitating towards him - right from the start, his military commander Lord Fairfax (Simon Kunz) defers to him. Cromwell's own brushes with the divine consist of him praying for advice on what to do next, and awaiting a message from above - god's advice of course always happening to coincide with whatever Cromwell was going to do anyway. But some of his achievements outstrip what he had intended - near the end there's a stark reminder of just how much power he's amassed, and just how little change deposing the king might have really brought about.

Howard Davies' production fair rockets along - the first time I checked my watch I was surprised to see we were almost an hour in. And Brenton's play brings life to a period of English history that's surprisingly under-represented on stage. I never studied British History and much of my knowledge of it comes from the theatre, so it was interesting to delve deeper into a subject I only knew the barest facts about. Phill on the other hand is particularly interested in the period and thought the central figures came across well, accurately to how history portrays them, and he particularly liked how Gatiss resisted the temptation to overplay Charles' extremes. 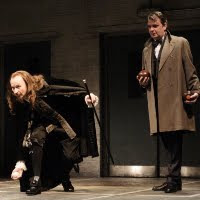 So regardless of how much you know about the events it's based on it seems 55 Days has something to offer, an entertaining, sometimes funny look at the inevitably violent clash of people convinced that god is on their side.

55 Days by Howard Brenton is booking until the 24th of November at Hampstead Theatre.