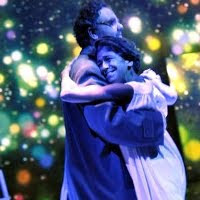 Of all the former EnsembleTM members who might have made a speedy return to the RSC, I would have put Kathryn Hunter at the bottom of the list after her very public resignation from both that season and her position as an RSC Associate. But return she has, and as she's one of those actors whose performances are always worth catching if at all possible, A Tender Thing saw me make a trip to Stratford-upon-Avon for a show that's not even as long as the train trip each way.

Apparently the question "what would have happened if Romeo and Juliet had lived and grown older" is one that continues to haunt writers and actors. (I don't know why, the answer is "they'd have broken up within a fortnight." Oh shush, you know they would.) Ben Power doesn't quite attempt to answer this question: Instead he creates a new Romeo and Juliet out of the original words of Shakespeare's play.

We meet Juliet (Hunter) on her deathbed, but soon Romeo's (Richard McCabe) recollections take us back to the very earliest days of their relationship and the first flush of love that doesn't seem to have faded since. What has faded is Juliet's health, and eventually she will find herself asking her husband to help her die. 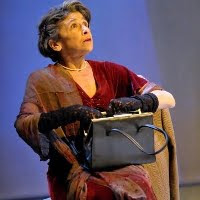 Power has taken his entire text from Romeo and Juliet, rearranged to tell a new story, but although only the two lovers appear in this version he hasn't restricted himself to the lines originally allocated to them. So we get to see Hunter perform Mercutio's "Queen Mab" speech, albeit with less of the original smuttiness. Here it turns into an attempt to reassure Romeo that a prophetic dream of her death is nothing to be taken too seriously. Where some lines have been more heavily rearranged to provide new meaning, at other times longer chunks remain intact: The newlyweds' bedroom scene after their first night of marriage turns into the older Juliet's final night's sleep before death. Although of course some of these transpositions carry significance that harks back to the original context, as in Romeo and Juliet this is also the couple's last night together, they just don't realise it like they do here.

Director Helena Kaut-Howson has, along with movement director Jane Gibson, given the play a balletic touch that helps push along the moments where the high concept leaves the text a bit strained. Romeo and Juliet often slow-dance together, whether in flashback to their younger days, or in later attempts to relive these dances, Juliet unable to get around as well until eventually, reluctantly, she has to be spun around by Romeo in her wheelchair. Jacques Collin's projections, which evoke the feel of the couple's seaside retirement home on Neil Murray's bare-ish set, often places them in whirling vortices for these dances, giving them a sense of impending doom. 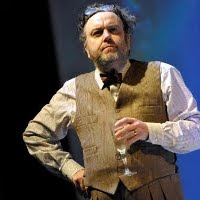 Hunter is of course always good - the role doesn't require quite the ostentatious physicality we sometimes see from her, but her incredible flexibility does lend an extraordinary amount of detail to the progression of her character's illness. But McCabe also steps up to the plate, in the less showy but quietly heartbreaking role of the man who, if he makes the ultimate demonstration of love that his wife asks of him, will end up losing her.

Back in January there was a whole slew of plays dealing with the issue of assisted suicide, and A Tender Thing fits into their ranks as, perhaps inevitably given the source material, the most lyrical entry. It's sad, of course - I spotted a few red eyes as I looked down into the stalls and there was a conspicuous amount of sniffing and nose-blowing as the house lights went up - but it doesn't tip over into becoming something depressing. 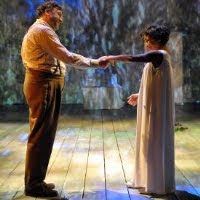 I'm not sure how much Power's patchwork script stands on its own as the amount of work done by Kaut-Howson, Hunter and McCabe in exploring it and bringing it atmospherically to life is plain to see. But A Tender Thing is a fairly bold piece of textual work in a year that, thanks to the World Shakespeare Festival, has seen quite a few of them; and if it  doesn't quite stand on its own two feet without the ghost of the original play behind it, it's certainly one of the most successful of these experiments.

A Tender Thing by Ben Power, based on Romeo and Juliet by William Shakespeare, is booking until the 30th of October at the Swan Theatre, Stratford-upon-Avon.