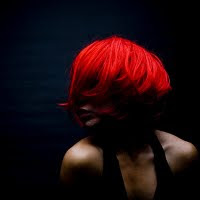 The casts of both Lungs and One Day When We Were Young come together for the final play in Paines Plough's Roundabout season at Shoreditch Town Hall, The Sound of Heavy Rain. Where the other two plays are intimate relationship stories, Penelope Skinner's contribution is a drily witty pastiche, relocating the hard-boiled detective tropes of film noir from LA to the rain-soaked streets of Soho. Dabrowski (Andrew Sheridan) is a PI who spends his nights drinking to get over being dumped, when the dowdy Maggie (Maia Alexander) arrives at his office with a case for him. Her best friend and flatmate has disappeared, and the detective sets off to find the glamorous cabaret singer Foxie O'Hara. But the further he gets into the case, the more Dabrowski starts to suspect that Foxie may never have even been real. 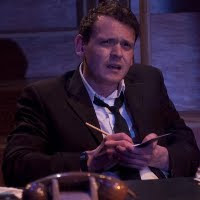 Sheridan is very good as the disheveled detective whose narration holds the whole piece together and provides some of the funniest moments of commentary on the genre as he converses with an imaginary Foxie (Kate O'Flynn) to try and get to the heart of the mystery. Meanwhile Alistair Cope keeps popping up as the seemingly unremarkable Graham, telling the audience of his desire to be someone more memorable, which gradually seems to be taking a sinister turn that may be connected to the woman's disappearance. The Sound of Heavy Rain is mostly a pretty entertaining piece of comic adventure, with a couple of nice twists; but Skinner does weave in some interesting themes throughout as well, dealing with identity and the way people see us, as opposed to how we would want to be perceived. And as is only right in a story like this, it may be that the detective comes away finding out more about himself than about the case he's supposed to be investigating. 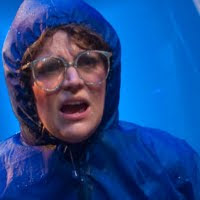 The intimacy of Lucy Osborne's Roundabout design was perfect for bringing us close to the emotion of the other two plays; this time director James Grieve expands its horizons from the stage to the seating, where characters often appear on the stairs and Sheridan's conversational narration means he's often making eye contact. (One of the reasons I like the front row is that most people seem to avoid it, and if the performance is not sold out, as tonight, the actors can be left without much to feed off from the audience if they're all hiding at the back. Completing the collection, I was in the pink seats this time along with Jim, who fortunately turns out not to have any strong feelings either way about buttons. Actually the usually busy blue bank was the emptiest tonight - maybe a lot of people there were on their third show and had already chosen the most popular colour.)

Skinner's come up with an entertaining show that, with its story of Soho showgirls, even has a bit of a camp sensibility. It does move towards a darker tone at the story's end, and I'm not sure the decision (whether the writer's or the director's, I don't know) to end on a musical number quite works in that context. But overall both Jim and I enjoyed this quite a lot.

The Sound of Heavy Rain by Penelope Skinner is booking in repertory until the 27th of October at the Roundabout Auditorium, Shoreditch Town Hall.