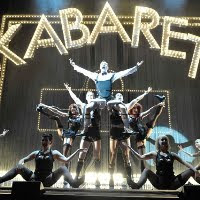 In a busy year for Kander & Ebb revivals this was always going to be the main event (especially with Chicago finally giving up the ghost.) Rufus Norris revisits his 2007 production of Cabaret, which returns to London with all its grotesquery intact, plus a couple of star names in the leads. With it being just over a month since I saw I Am A Camera, it's easy to spot some of the major changes Joe Masteroff made to John Van Druten's play and Christopher Isherwood's original stories - most notably the conflation of Isherwood's character with that of Clive Mortimer, so now the outsider's view of Berlin is provided by Clifford Bradshaw, an impoverished, bisexual American wannabe writer. There's also a gentler, more emotional storyline to the subplot where landlady Fräulein Schneider makes concessions to the rising Nazis for an easy life, as well as the creation of a new lead character as we see some of the Kit Kat Klub where Sally sings, and its enigmatic Emcee. 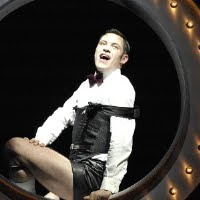 Norris' production puts the Emcee very much front and centre, so it's just as well that of the two bits of potentially risky star casting this is the one that's paid off. I mentioned that the production revels in the grotesque, and no character more so than the club's host who looks, in Will Young's portrayal, like a satanic Pinocchio (ironically enough considering he turns swastika-wielding puppet-master himself at the end of the first act.) His vocals are strong throughout, and right from the start he embodies the show's seething, unpredictable anger, which celebrates the city's hedonism while the Nazi threat rises, noticed but underestimated. Perhaps casting someone whose public profile at least is of a cosy, middle-class pop star, has increased the impact; or maybe, like the Berliners themselves, some audience members new to the show were aware of its setting but didn't realise how heavily it figures. Either way, the first big gasp when a dancer draws a Hitler moustache on Young during "Tomorrow Belongs To Me" wasn't the only one of the evening.

Other malevolent moments include a drooling, vomiting "Money Song" and the vicious reveal of "If You Could See Her" (which I think has been restaged, more simply, since I last saw the show) but as well as laying the musical's politics bare Norris has also used the opportunities of the Cabaret setting in more fun ways, like the visual comedy of "Two Ladies," and of course the Emcee presides over a sexy ensemble of androgynous Boys and Girls. Early on there's a
FULL-FRONTAL MALE NUDITY ALERT!
as Nuno Silva gets his Helmut out (I would have chosen to display Ian Parsons' Hans myself, but as with all the Boys and Girls plus Young, Parsons does at least get his arse out for the show's final slap in the face.) 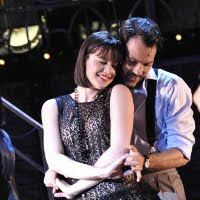 The TV star casting is shakier with the role of Sally Bowles, with Michelle Ryan really not convincing me that her Sally was any kind of unhinged, slightly dangerous free spirit. Her pronouncements of her own fabulousness ring hollow, and she barely even seems like one of those people who likes to declare "I'm mad, me," let alone a genuine eccentric; and there's little pain in her "Maybe This Time," or breakdown in her "Cabaret." She can belt out a tune, but she does constantly fall into a bit of a common X Factor trap, as she concentrates on hitting the "big" notes to the detriment of some of those along the way. (And who'd have thought that this, out of the two above-the-title names, would be the one to put me in mind of TV singing competitions.) Sally and Clifford's relationship is an odd one, part fag-hag part lover, and the lack of chemistry between Ryan and Matt Rawle doesn't help - it's not their fault that there's no explicit statement of their having had sex, but the revelation that Clifford could theoretically be the father of Sally's baby feels implausible. 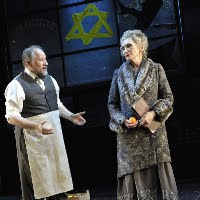 A much easier couple to connect with (though stuck with some of the show's less interesting songs) are the show's older couple, the formidable Siân Phillips as Fräulein Schneider, and Linal Haft as Herr Schultz, the Jewish greengrocer she has an ill-fated relationship with. Phillips is so good in these moments of quiet anguish as she leaves behind the man she loves because she fears for her own safety. She also has a good back-and-forth with Harriet Thorpe in her more comic relationship with Fräulein Kost, the prostitute whose tireless efforts to keep the navy's spirits up help keep the rent coming in, as well as providing some of the more comic moments of life in the boarding house. This revival of Norris' Cabaret has an emotional gap due to the miscasting of Sally, but his was always a take on the show that was all about the Emcee and his Boys and Girls anyway, so the production's strengths manage to overcome its weaknesses.

Cabaret by Joe Masteroff, John Kander and Fred Ebb is booking until the 19th of January at the Savoy Theatre.