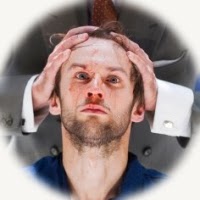 Headlong's latest tour, and the last to be programmed by Rupert Goold, sees Robert Icke and Duncan Macmillan attempt to bring George Orwell's 1984 to the stage. The most famous dystopian novel and one whose key phrases have entered the language (and inspired a couple of TV shows that were probably not... quite what Orwell had in mind,) it creates a very specific alternate universe that might have been hard to bring to life. The way they've done it is not to try and expand out into Big Brother's world, but to focus right into the mind of Winston Smith, to the point that what's real and what's in his head blurs - just as his eventual torturers want, of course. In a world where the Government controls everything people say and tries to control what they think too, Winston (Mark Arends) has rebellious thoughts. When he meets Julia (Hara Yannas) and falls in love, his thoughts spill out into action, but Big Brother is always watching.

The story opens with Winston writing a diary, a criminal act in itself, and imagining that it may be a record for future generations. Icke and Macmillan have given the play a framing device where a reading group in the year 2050 pore over the significance of the text he left behind, and which has become a modern classic - or are they just his imagined version of a future audience? The reuse of the diary prop for a different purpose later in the play adds a further, intriguing level of confused reality. 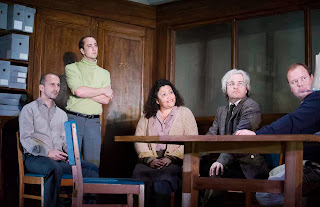 The seminar room, lined with archive boxes, where the book group takes place, becomes the setting for Winston's story, as he is fed a daily diet of propaganda by the ubiquitous video screens which are also capable of watching back. Every day the "two-minutes' hate" reveals a new enemy of the state to be executed while the audience scream abuse at the screen, children are encouraged to inform on their parents and Winston's own job involves erasing from history anyone who's offended Big Brother - making then an "unperson." Maybe this is why his revolutionary thoughts particularly focus on the idea of preserving history.

At the heart of the piece is the well-realised relationship between Arends and Yannas' characters, a crucial element because Big Brother's plan is to subvert this love itself. 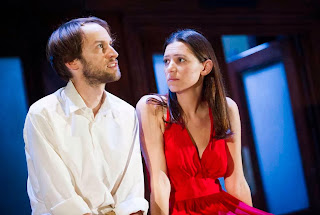 There's something of the formal exercise to the productions as it builds up Winston and Julia's story and its backdrop of a totalitarian state taken to the logical extreme, that makes it all the more brutal when Chloe Lamford's set falls apart to reveal the clinical setting for the horrific finale. This shift may come a little bit too late - there had been quite a few walkouts before that point tonight, perhaps put off by storytelling that can be on the dry side. The climactic half-hour does have a very different, nastily effective energy of its own though. 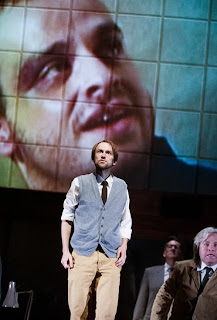 And the adapters have done a good job of honing in on the themes they particularly want to look at, namely that reality is what you convince yourself it is - or what someone else can convince you - and of the way the evolution of language can be used to this effect. Orwell's vision of a frightening future of course contains a worrying amount that is true today, and Icke and Macmillan don't hammer this home, choosing instead particular phrases that stand out in chilling familiarity. 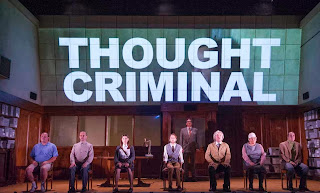 This adaptation of 1984 isn't perfect, but it does prove an effective telling of the story that has a real distinctive feel and personality of its own as well. And it seems to me a particularly good example of using different theatrical styles within the same production as best suits the play, without them jarring against each other.

1984 by George Orwell, adapted by Robert Icke and Duncan Macmillan, is booking until the 26th of October at Richmond Theatre; then continuing on tour to Liverpool, Cardiff and Leeds.