PREVIEW DISCLAIMER: The NYT are inviting the London critics in tomorrow. 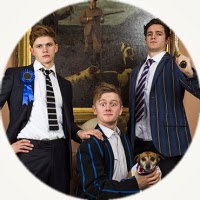 A politically-themed week for me, with two Brecht plays bookmarking two plays about former Conservative Prime Ministers. The first of the latter sees the National Youth Theatre revisit a show they commissioned five years ago, James Graham's Tory Boyz. I suspect my readership won't need any hints about what the spelling of "boys" with a z signifies, but if you're a newcomer1 you might not have inferred it was about gay Conservatives. It's an enduring contradiction in British politics that a party with a poor track record on gay rights to say the least, has always had such a high gay membership. Closeted Tory MPs getting outed certainly felt like it used to be a weekly occurrence in the 1980s, and it's always been rumoured that the party also gave the UK a closeted gay Prime Minister, in the confirmed bachelor Ted Heath.

Sam (Simon Lennon) is a researcher for a Tory Education Minister. He's openly gay, something which is no barrier to getting ahead in his current field where he's predicted to have a big future. He may not be satisfied with staying behind the scenes though, and ambitions of running for office as a Conservative, even in 2013, mean he feels like he should keep his sexuality under the radar. 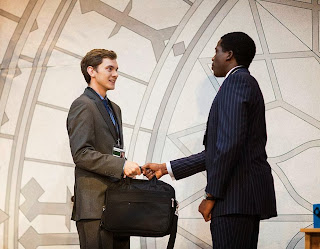 Discovering the office he now works in once housed Heath (Niall McNamee,) Sam starts to become interested in putting to rest, one way or the other, the rumours about the former PM's sexuality; and if he was indeed gay, whether the way he suppressed it remains the only way to get to the top. Graham has revisited the script since its premiere; as was the case with Laura Wade's rewrites of Posh, this is largely to reflect the change in government and see these people in power (albeit in a coalition, the Lib Dems getting an inevitable bashing here from their supposed partners.) What's interesting in this context is the amount of gay-friendly legislation the Coalition has passed, opening up a whole different question about where gay Tories stand, and what it means if their party is being socially liberal to distract from their right-wing financial policies. But this is perhaps too big an area to be covered in a rewrite of an existing work, and is inevitably unexplored - maybe that could be the prompt for Graham's next political play. 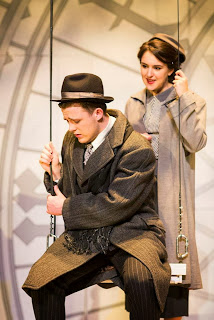 It's interesting to see Tory Boyz again with the hindsight of Graham's big hit from last year, This House. You can almost pinpoint the scene (Heath during his time in the Tory Whip's office) that inspired the playwright to look at an entire decade's politics from that vantage point. It's also an indicator of how much he's improved in creating a theatrical epic, as there's undoubtedly something clumsy about the way Tory Boyz is put together; as well as Sam's delving into Heath's history (which includes a device where the two communicate across time) there's his weekly visits to a high school to research education policy and try to interest the students in politics. And what may be the crux of the story, his awkward attempts at a relationship with Labour counterpart James (Tom Prior,) highlighting the idea that it's a particularly Tory-specific idea that you can be openly gay in politics as long as you don't appear to enjoy it too much. 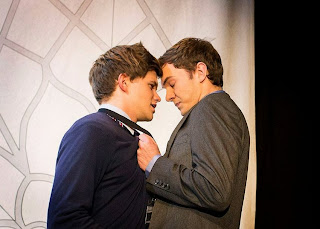 The play's sprawling nature also suffers a bit in the rather rushed nature of Thomas Hescott's new production; he allows the opening half hour's pace to be dictated too much by Sope Dirisu's Nicholas, Sam's obnoxious boss and a figure to be disliked rather than intended to dominate the whole production's tone. With the play bouncing back and forwards in time and place, a little bit more time spent on clarity of storytelling would have been useful, and although I'd seen the play before so had no problems, Laurie did say that for the first few scenes he struggled to follow it. Zooming through the dialogue doesn't do the jokes any favours either. You might of course ascribe this to nervous young actors but if that's the case those nerves aren't evident anywhere else - this year's NYT programme is a particularly ambitious one, giving a single ensemble a three-play repertory in a West End theatre2, and they seem confident enough up there. But I think the popularity of the play last time has led to a production that doesn't tackle some of its structural problems, leaving them exposed.

Tory Boyz by James Graham is booking in repertory until the 29th of November at the Ambassadors Theatre.

1welcome! You're likely to be disappointed.

2one I'd never been in before, Stomp! having been resident there since the Middle Ages.
Posted by nick730 at 22:13