The title of Jim Cartwright's Two refers to the number of people in the cast, one man and one woman playing, between them, everyone who goes into a small local pub in the course of an evening. So the fact that the new production at Southwark Playhouse features four people on stage may seem paradoxical. But this is the latest show from Deafinitely Theatre, the deaf and hearing-impaired company that performs in both English and British Sign Language, and hopes to appeal to both a deaf and hearing audience. So Andrew Muir's production gives Cartwright's play a new conceit: Matthew Gurney and Paula Garfield play the landlord and landlady, Sophie Stone and Jim Fish all the customers. The former pair communicate entirely in BSL, with the latter speaking an English translation. And for the scenes with the customers, the situation is reversed.

The play is made up of various little scenes between the clientele, ranging from the gently amusing to the sad or dark. Interspersed with them are moments spent with the couple behind the bar, and the fact that they communicate in a silent language is used to accentuate an obvious coldness between them. 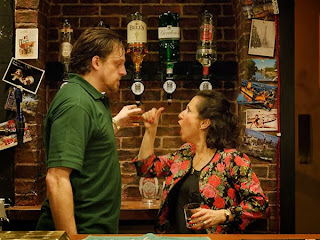 Cartwright's play itself seems a bit of a mixed bag to me, like a clumsier John Godber play that doesn't quite get the balance between the different scenes' moods right. It's undoubtedly an accurate cross-section of a night in an average pub to find one table occupied by a light story, the next by a sadder situation and the next by a destructive relationship, but I'm not sure it's all tied together as well as it could be, some storylines border on the soap opera, and the final focus on the landlords' behind-the-scenes drama comes a bit abruptly. 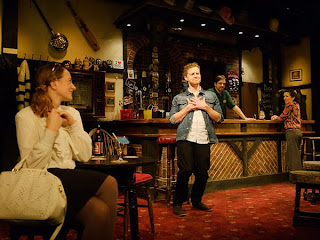 This ends up one of those shows where the production outshines the script, and to my mind it's the most successful of the three Deafinitely shows I've seen so far. At times in past shows I've felt acutely aware that I'm not the target audience - which is fine in itself, as 99.9% of shows are aimed at people who can hear, so there's nothing wrong with the odd one being targeted at those who can't. But as for the company's aim to help integrate deaf creatives into mainstream theatre, Two makes a much stronger argument than the earlier productions: Inevitably, people who can sign will focus more on Garfield and Gurney, those who can't will focus more on Stone and Fish, but giving equal weighting to the languages makes everyone feel included, and the staging allows us to take in and enjoy something of everyone's performance. And Muir comes up with slight variations in the way English and BSL interact as the show goes on, keeping things interesting. 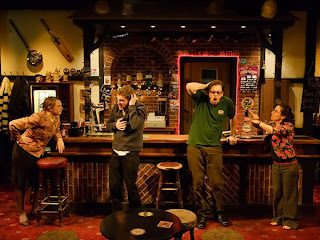 In the Little space, Simon Daw and Paul Burgess' highly realistic set is particularly striking (I wondered if it might be partly reused from some larger production, as I can't imagine Deafinitely and Southwark Playhouse having the budget to create it from scratch for a three-week run. Although I'm guessing the company contributed the sign behind the bar saying "You don't have to be deaf to work here, but it helps.") There's sometimes an obvious discrepancy in the performances of the actor playing a character and the one translating - Fish as a violent boyfriend drew gasps of discomfort from the hearing members of the audience, while Gurney's animated BSL translation of the same lines got laughs from the deaf ones. But for the most part this is an interestingly inclusive night of theatre that's disability-friendly without being ghettoised.

Two by Jim Cartwright is booking until the 16th of November at Southwark Playhouse's Little Theatre.