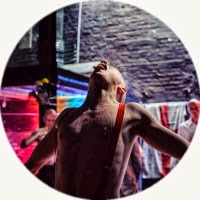 Obscure Shakespeares are like buses, you wait ages for one and then two come at once. From my first trip to a Shakespeare play in 1989 it took me 24 years to add Titus Andronicus to my collection, but only three months after that the second production comes along. The best thing is, in dealing with a notoriously problematic play two different directors have used completely different approaches to its tonal difficulties. Titus Andronicus is effectively Elizabethan torture porn - with non-stop bloodshed and sexual violence, a self-inflicted amputation straight out of Saw, and a notorious LOLcannibalism! finale, its horror can tip over into unintentional comedy. One way to solve this is to embrace the play's extremes like Michael Fentiman did in Stratford this summer. But another approach is to couch the horror in something we still find genuinely disturbing, and that's Zoé Ford's take at the Arcola.

This is a production that doesn't skimp on the gore but there may be more spit than blood on the stage because Ford sets the action in the 1980s, the Romans transformed into National Front-supporting skinheads, while their enemies the Goths get a rather literal makeover complete with guyliner. Titus (David Vaughan Knight) makes an enemy of the Goth queen at just the wrong time, as she surprisingly becomes Empress of Rome and the pair begin a tit-for-tat revenge campaign of bloodshed against each other's families. 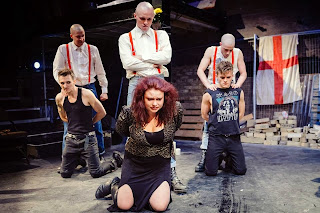 With a soundtrack of 1980s pop, the London skinheads are pitted against the Irish Goths led by Rosalind Blessed's Tamora. Full disclosure, I went to university with Roz and like her, so can't exactly offer an unbiased critique of her performance, you'll just have to take my word for it that she's good in this. I reckon I can be impartial about her hairstyle though: I'm not sure how the environmentally-friendly Arcola feels about the amount of hairspray she must be getting through - back-combing that would make Bonnie Tyler blush! 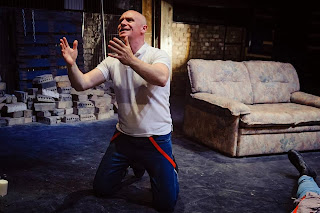 The setting gives just that little bit of distance but the gang violence (brutally choreographed by Martyn August,) topped off with the endless spitting that adds insult to injury, feels uncomfortably believable, the horror managing not to tip over into comedy until the production is good and ready: Once Titus himself can only laugh at his family's destruction the hysteria is embraced a bit more - I did like Blessed's Tamora trying and failing not to laugh when her husband stumbles across insulting graffiti about him. 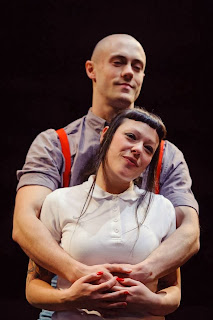 With any high concept take on Shakespeare the new setting will only work so far. Setting the action among the leaders of racist party is inspired in terms of the party leader's wife having an affair with Aaron (Stanley J Browne,) although if anything the fact that Aaron is hardly Shakespeare's most sympathetic portrayal of a black man feels even dodgier in this context. And putting almost every character into the National Front makes it hard for the audience to find the tiny shred of sympathy that can be there: Ryan Cloud's Bassianus and Maya Thomas' Lavinia have a convincing chemistry that makes you want to like them, but the fact that they're both covered in racist tattoos means it's hard to be too upset about their terrible fates. Liam Mulvey's got a particularly hard job with Marcus Andronicus, the resigned, wise old voice of reason not gelling with the fact that he too chose to shave his head and wear red braces. 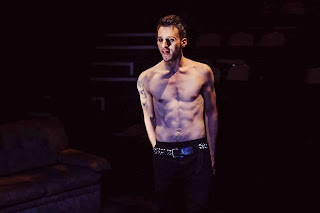 But Ford's production succeeds more often than it fails, and indeed succeeds more than it has any right to - the cheekily sexy swagger of Adam Lawrence and James Clifford's Chiron and Demetrius shouldn't be able to coexist with their fondness for sexual violence but somehow it does. This is nasty stuff, in a good way - as opposed to the sticky blood-and-phlegm-covered stage floor at the end, which is just nasty.

Titus Andronicus by William Shakespeare is booking until the 26th of October at Arcola Studio 1.