Theatre review: Bring Up the Bodies 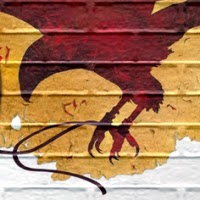 The second Mantel piece at the RSC's Swan, Bring Up the Bodies carries on the story of Thomas Cromwell (Ben Miles) where Wolf Hall left off. That play saw Henry VIII (Nathaniel Parker) saddled with a wife he's gone off and who can't bear him sons, and wanting heaven and earth to be moved so he can replace her with a younger model. He got what he wanted but at the start of Bring Up the Bodies his situation feels remarkably familiar. Anne Boleyn (Lydia Leonard) has produced the future Queen Elizabeth I but a son still eludes her, yet she continues to throw her weight around at court, blind to the potential danger. With Anne wildly unpopular, there's an opportunity to satisfy a lot of people's agendas by getting rid of her when the King's gaze starts to stray towards the silly, timid Jane Seymour. And having been instrumental in securing the second wife, Cromwell knows he has to be similarly useful with marriage number 3.

This time it won't involve a religious rift that affects the whole nation, but the plot he constructs is in its way every bit as convoluted. It's a more intimate affair, and perhaps because it involves Cromwell getting his own personal grudges dealt with in the process of installing Jane, it feels a more sinister one. 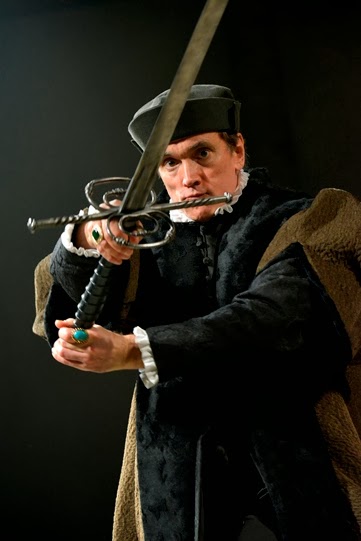 Although the same cast remains and plays as many roles as before, this feels less of an ensemble piece than Wolf Hall. We're focused more intensely on Cromwell now, and Miles shows him turning into the manipulating spin doctor he's more commonly known as, developing from the more blokeish figure he presented during his rise to power. Though the air of doom hangs over this installment, there are moments of humour. Some of these come from Joshua James, making a lot out of the relatively thankless role of Cromwell's secretary Rafe, himself learning the ways of politics from his master. And there's an incredibly dim Jane Seymour from Leah Brotherhead, who's "as much use as a blancmange" according to her father, who has a tendency to forget her name. Brotherhead is required to juggle Jane with a number of other characters in quick succession which she does confidently, helped by Christopher Oram giving them all distinctive costumes. 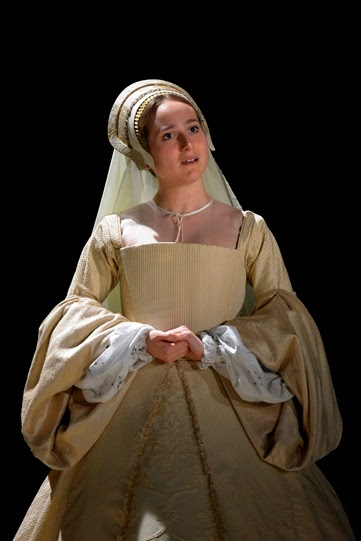 Before catching the King's eye Jane is assumed to be a potential wife for Cromwell's adorably gangly son Gregory (Daniel Fraser,) a match that seems better suited than what transpired, but probably wouldn't have resulted in particularly bright children. In contrast to Jane's innocence-to-the-point-of-stupidity, Anne's overconfidence results in encouraging flirtation with her courtiers that will eventually be used to bring about her downfall. Their behaviour is so overt that Nicholas Shaw as Brereton has a
FULL-FRONTAL MALE NUDITY ALERT!
which director Jeremy Herrin has thoughtfully blocked so it was only visible from the area I was sitting in1. 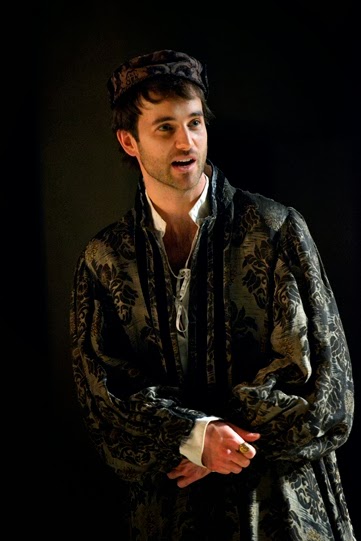 Although Mantel's take on Anne Boleyn isn't the innocent victim of many interpretations, she doesn't suggest the many affairs she was executed for were real, either. Of the accused, only Joey Batey's Mark Smeaton confesses, and that's the bragging of a rather dim boy who's trying to prove he isn't gay. Much as I can see why the Queen might want to get hands-on with Master Batey, the metaphorical witch-hunt, that eventually becomes a real one, remains the impression here. Near the end of Wolf Hall, a masquerade poking fun at the late Cardinal Wolsey2 (Paul Jesson) angered Cromwell, and it's repeated at the start of Bring Up the Bodies. It's no coincidence that the five men who took part are the same five who lose their heads over Anne, making this installment in many ways the story of Cromwell's personal vendetta. Mantel also uses this device to "solve" a historical mystery, of why Thomas Wyatt (Jay Taylor,) the first person most people would have scapegoated as Anne's lover, survived over much less plausible candidates. 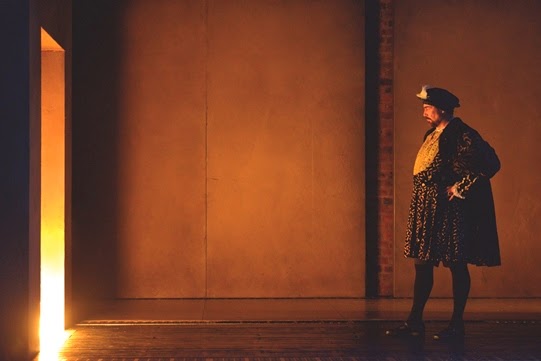 By the end there's another cliffhanger, so presumably Mantel still has a door in her house that needs a Booker prize to prop it open and is planning a third volume? If it was always meant as a trilogy it's odd that the RSC would stage it now that only two books have been published. Maybe they're planning to revive these two when the conclusion can be added to them. In the meantime although I found Wolf Hall marginally the stronger, both shows stand alone entertainingly.

Bring Up the Bodies by Mike Poulton, based on the novel by Hilary Mantel, is booking in repertory until the 29th of March at the Swan Theatre, Stratford-upon-Avon (returns only.)

1the low numbers in the stalls, not that that means you can deliberately book there since it's sold out. I suspect that the seats directly opposite me got a similar view off Pierro Niel Mee at one point. Maybe for the expected transfer to Wyndhams it'll get restaged to give everyone an eyeful.

2Wolsey is one of a number of ghosts from his past who haunt Cromwell's dreams, which is presumably one of the meanings of the title. On Wolsey's first appearance, a man sitting behind me stage-whispered "HE'S DEAD, BY THE WAY!" in case anyone within a five-foot radius was a bit slow on the uptake.
Posted by nick730 at 21:09