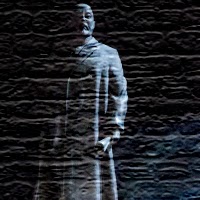 The first King Lear I ever saw, 20 years ago, starred Robert Stephens in the title role, and Edgar was played by the then rising star of the RSC, Simon Russell Beale. It maybe says a bit too much about my age that the wheel, which is so often referenced in the play, has come full circle and it's now SRB's turn - admittedly at the comparatively young age of 53 - to play the king who abdicates in all but name. He reunites with his long-time collaborator Sam Mendes on the National's main stage, and although it's a long-awaited event I couldn't help but feel a little bit apprehensive given I didn't love any of Mendes' Bridge Project productions. King Lear, though, sees the director get his Shakespearean mojo back for a truly epic - there's no major text cuts so we're in it for the full three-and-a-half hours - and emotionally devastating production.

King Lear is a feared, but increasingly erratic tyrant. His latest unexpected decision is to hand the responsibilities of rule to his daughters, retaining only the title and the perks that come with it. The country is split between the two daughters who flattered him the most, but as civil war looms their father starts to look like an easily dismissed inconvenience. 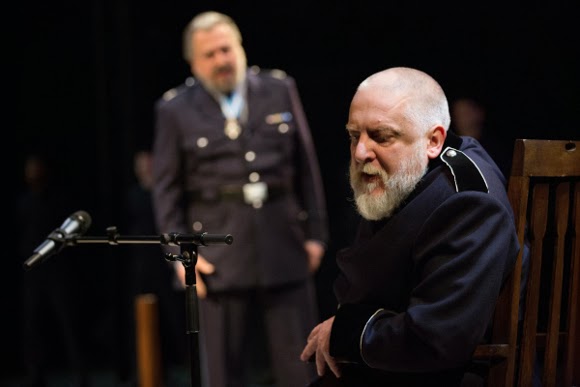 Like most productions do at the moment, Mendes' takes the approach that Lear is a pretty vicious ruler. Anthony Ward's designs, as well as the behaviour of all around Lear, strongly suggest a police state run through fear. It's a reading I feel make sense in some ways and not others. There's a logic to making it a play about a man punished for his former cruelties by losing everything when his power's gone; it's hard to reconcile with the pathos of Lear's fall into madness though. I think what's missing to make this reading completely work for me is a character who stands somewhere in the middle, who acknowledges that neither Lear's rule nor his later fate were right. 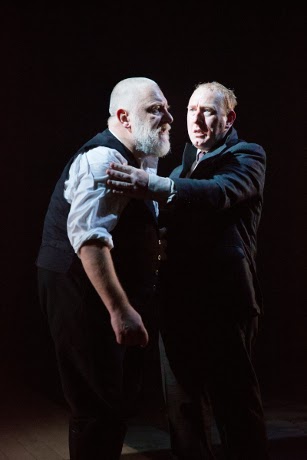 Still, Mendes has a lead actor who can carry off these contradictions, and if SRB has been slightly on autopilot for a few recent performances he's absolutely back on form here with a performance that goes from toad-like dictator (there's a touch of the Richard III to his early scenes) to broken old man and brought much of the audience to sobs. He's surrounded not only by a top-flight cast but some interesting casting decisions as well. Adrian Scarborough's Fool isn't here the king's personal jester but the entertainment for the whole of his retinue of knights (not quite the full 100, but the National's resources have provided a large supply of extras to slowly dwindle as Lear's power fades.) The Fool is what's left at the end, the "one" of Regan's "What need one?" 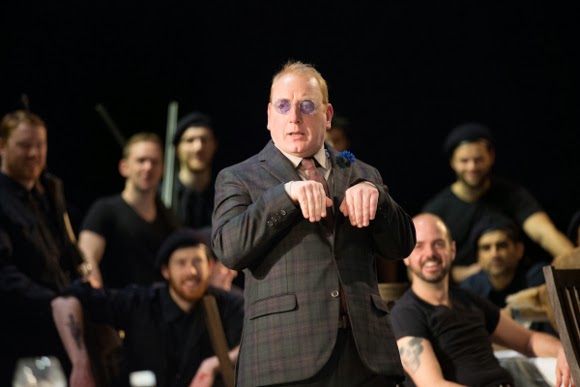 Mendes also comes up with probably the most interesting way I've seen of solving the Fool's unexplained disappearance from the play, a moment SRB gets to movingly call back to. As for the King's daughters, Kate Fleetwood's icy Goneril contrasts with Anna Maxwell Martin's hot-headed Regan, while in this afternoon's performance Olivia Vinall as Cordelia dealt with aplomb with a succession of onstage mishaps - first getting her heel caught in her dress and nearly falling off her chair, then having her big entrance with her army scuppered by a set malfunction. 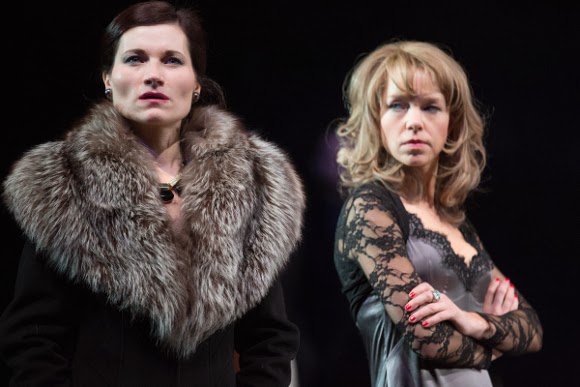 There's a particularly brutal blinding of Gloucester - maybe Stephen Boxer brought a few vats of blood back from the RSC with him last summer. There's a great Edgar from Tom Brooke, amiably feckless, an easy target for Sam Troughton's ruthlessly businesslike Edmund. Brooke then goes all-out for Poor Tom, giving him a
FULL-FRONTAL MALE NUDITY ALERT!
that results in the funniest reading of "Tom's a-cold" I've ever seen. 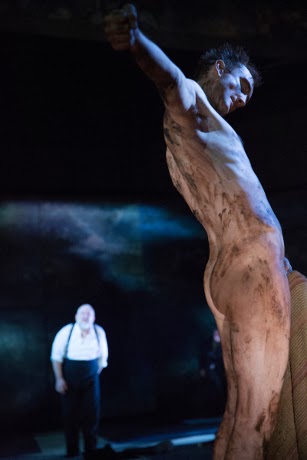 Because there are lighter moments in what is one of the most emotionally wrenching productions of the play you're likely to see. Stanley Townsend's Kent, Simon Manyonda's Oswald and Richard Clothier's Albany are also worthy of a mention in a production that feels in some ways definitive while also providing a few surprises.

King Lear by William Shakespeare is booking in repertory until the 28th of May at the National Theatre's Olivier (returns and day seats only, further performances to be announced.)