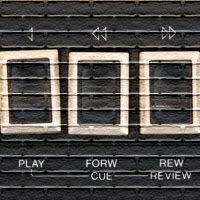 Daniel Kitson returns to the Lyttelton stage with a one-man show that really takes advantage of the space's vast emptiness. A piece of storytelling theatre whose high concept came before the story; indeed the storytelling device determined the story. Analog.Ue features a lot of words spoken by Kitson, but he doesn't say any of them live. When he enters the stage is almost bare, a stack of reel-to-reel or cassette recorders stored at the back, a number of plug sockets on a table downstage. In almost-darkness, Kitson carries one machine after another, sets it up and plugs it in. Each of the 46 tape recorders contains a fragment of the story a few minutes long, and as each one is set up and played the stage gradually fills up with machines, electrical cables spreading out from the central table like a giant spider.

The story is one that spans decades: In 1977, Thomas is an elderly man who's finally agreed to do what his wife's asked him to for years, and record his thoughts on "everything," although mainly this turns out to be his thoughts on his wife. For reasons that become apparent later, he's recording on dozens of reel-to-reel machines, in short snippets. In 2013, Trudy is a lonely young woman in a dead-end job. As a child, she chanced upon one of the fragments of Thomas' story, and she still has it to this day. It comforts her, but her fixation with this piece of a larger puzzle may be what derailed her life in the first place. 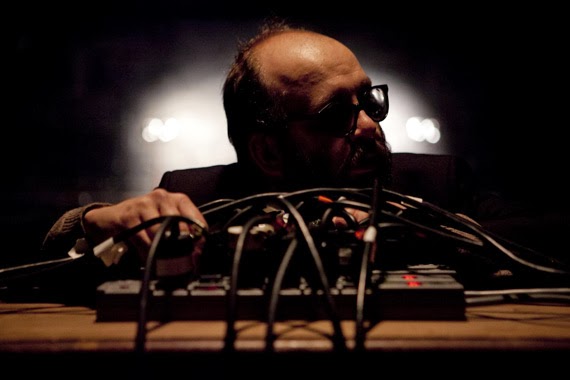 Analog.Ue is certainly unusual, and pretty special; Ian went so far as to call it magical. Its format is a huge part of its charm of course - in between the story we get occasional recordings made, if we're to believe them, the day before the show opened. In these Kitson goes over the chaotic creative process that resulted in the show, and makes it sound as if it was touch and go whether he'd end up having any kind of show in time. With Kitson occasionally getting the timing of the tapes wrong, not having re-recorded the speeches even when his stammer asserted itself, and once tripping over the wires, it's easy to believe that this really is as nebulous and fragile a performance as it seems. Watching it is an interesting experience as you find yourself trying out different ways to take it in - you can close your eyes for a while and treat it as a radio play, or watch the non-stop journey around the stage carrying machines and - when a particularly long recording gives him lots of time to set up the next one - breaking off for a cup of tea out of a flask. The story itself is a bit rambling but it largely adds to its charm; this is all rather moving and memorable.

Analog.Ue by Daniel Kitson is booking in repertory until the 20th of March at the National Theatre's Lyttelton.