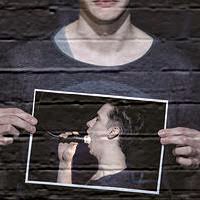 Last trip to the New Diorama for now, for three monologues to conclude the Reptember season in which The Faction showcase their actors and creatives. Kate Sawyer is one of the company's regular members who most often impresses me, and she and director Rachel Valentine Smith have come up with the most innovative of the nine pieces in terms of staging. Lorca's Duende is a lecture on the titular, indefinable Spanish word, something akin to "je ne sais quoi" or "the X factor" but with an inherent melancholy. Sawyer arrives on stage dressed like a clown1 to deliver the lecture, but freezes on seeing the audience. In a solution reminiscent of Analog.Ue, she plays a tape of herself speaking the words, while acting out the beats, playing slides and music to help illustrate her points. Lorca's essay makes some interesting points about the awareness of life's transitory nature being a vital component of great art; Sawyer and Valentine Smith update it to include the unlikely despair in Kylie Minogue's "Better The Devil You Know" and reveal something of a crush on Nick Cave. It's playful and innovative but with touches of the Duende it discusses.

If there's one thing Reptember's showcased that it probably didn't want to, it's Gareth Jandrell's tendency to overwrite the bejesus out of anything. I've never seen Goethe's Faust, so I don't know how it differs from Marlowe's version other than being much longer. At least Jandrell's adaptation doesn't try to condense it all, mainly restricting it to the story of Faust's lust for a teenage girl. Mark Leipacher's production starts well, with Cary Crankson as the depressive demon Mephistopheles starting his speech from the audience while the set of Duende is still being cleared up. But once he gets on stage the delivery becomes pretty static, and the monologue that follows is rather muddled and goes round in circles, leaving Crankson not always looking too sure where in the story he is, and at one point having to go back and do a bit he'd missed - at least he apologised in character. It's a shame because the ending as Mephistopheles laments the Paradise lost over picking the wrong side has the potential to be very moving, but it takes too long coming.

Of the two resident directors, Rachel Valentine Smith has shown the most spark of invention this season, and we end on the one piece to use the original text, since it's the only one in English: Christopher Hughes performs Shakespeare's epic poem The Rape of Lucrece, and in the only real direct link between two pieces in a programme, this also sees a man tortured by forbidden lust. The Roman general Tarquin struggles with his attraction to his friend's wife Lucrece, but doesn't struggle enough, as we soon see her rape and its consequences. The set's just a mattress, a sheet and a pillow, but Valentine Smith and Hughes use them creatively and in a number of different ways to keep the piece dynamic. It needs it, as at well over an hour it's the single longest piece of the nine, and they could perhaps have considered making some cuts for performance. But it's effective and Hughes, who after appearing in this January's season seems to have been made a regular ensemble member, impresses while going through a variety of emotions.

Overall the season has been mixed; the actors have for the most part fared well but not all the writing has been of the same quality, and Leipacher's direction has sometimes seemed fairly static. Taken all together the nine pieces have also tended towards the overwhelmingly bleak, which makes for a heavy season if you catch all three triple bills. But there's been some genuine highlights, and some hope that the creative spark may be back in time for their next rep at the venue (which begins in January 2015 with Romeo and Juliet.) If you can only catch one, it's probably worth going for Flower/Medea/Metamorphosis, but this comes a close second, with Prometheus/Dogs/Borkmann the most easily skippable.

Reptember - Duende by Federico García Lorca adapted by Kate Sawyer and Rachel Valentine Smith, Faust by Johann Wolfgang von Goethe adapted by Gareth Jandrell and The Rape of Lucrece by William Shakespeare is booking in repertory until the 20th of September at the New Diorama Theatre. The nine monologues will also play in slightly different combinations at Greenwich Theatre from the 16th to the 20th of September.

1minimal clown makeup so I reckon anyone phobic should be OK
Posted by nick730 at 19:04