Theatre review: Reptember - The Man With the Flower in His Mouth / Medea / Metamorphosis 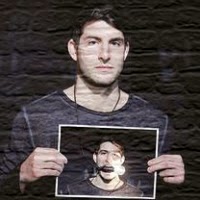 I've been plugging ambitious rep company The Faction for a few years now, but by the end of this year's season I was starting to wonder if their choices of text and style of production were in danger of becoming a bit predictable. Almost as if they heard me, for the first time they've announced a September repertory season at the New Diorama in addition to their usual January/February one, with a new direction both in style and presentation - and if the latter involves Tom Radford rolling sweatily around the floor with his top off that's just a bonus. Reptember is a trio of triple-bills, each of the 9 plays being adaptations - some looser than others - of classic works. But unlike most of the source material, these new versions are monologues, performed by regular members of the ensemble and a couple of guest actors.

In the case of the regulars, this is an opportunity to see some of those who've not always got to take a starring role before, take centre stage. So we start with Lachlan McCall, performing Pirandello's The Man With the Flower in His Mouth. Mark Leipacher adapts and directs a version in which a man sits at a table in a cafe late at night, speaking to a stranger who's just missed his last train home. McCall speaks his monologue into a video camera, the picture projected onto the back wall (at least it was until, in what I assume isn't meant to be part of the performance, McCall knocked it over and broke it.) It's quite an intense, slow burn of a performance that builds to a quietly sad reveal on why the narrator has been dwelling on matters of life and death.

Like the first monologue, the second runs for about half an hour, and follows straight on. I was least keen on Emily Juniper's free adaptation of Euripides' Medea, which plays as more or a riff on the mythology than an actual retelling of the story. Guest performer Sakuntala Ramanee makes the best of a narration that sometimes comes from Medea herself, sometimes from the perspective of the poisonous dress she kills her rival with. There's some interesting reflections on the character's mindset but little dramatic impetus, making this feel more like a poem than a piece of theatre; and I imagine anyone unfamiliar with the story would have been lost.

After the interval comes the longest piece, in which Tom Radford plays Kafka's Gregor Samsa as he undergoes a Metamorphosis into a giant beetle. Radford's always looked to be one of the most physically fit members of the company, and he uses this in an athletic, wall-climbing performance that harks back to some of the energy that made me want to follow The Faction's work in the first place. Initially manifesting itself as physical twitches as he tries to relate a seemingly everyday story of a soul-sucking office job, the transformation becomes impossible to ignore as Gregor is ostracised from his family and confined to his filthy bedroom. Director Rachel Valentine Smith effectively builds the pace and strangeness of Gareth Jandrell's script through Radford's performance, making for a triple bill that throws down the gauntlet to the rest of the company. Although looking at the titles of the other six shows, I think that one thing that's missing from this triple bill is unlikely to turn up in the others - and that's the odd moment of light relief.

Reptember - The Man with the Flower in His Mouth by Luigi Pirendello adapted by Mark Leipacher, Medea by Euripides adapted by Emily Juniper and Metamorphosis by Franz Kafka adapted by Gareth Jandrell is booking in repertory until the 19th of September at the New Diorama Theatre.