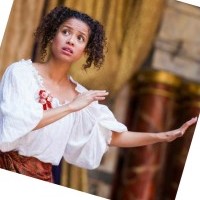 One bonus of blogging my thoughts about every show I see is that when I spot future talent, I can go back and be smug about it when I'm right. It's not just actors* - it's a pretty quick turnaround since I saw Jessica Swale's Nell Gwynn being premiered at LAMDA, and said the play deserved to be picked up by a professional company. A year later and it has been, by Shakespeare's Globe where Swale's playwrighting debut Blue Stockings was also staged. Christopher Luscombe directs the first professional production, and the venue's unique dynamic is a great match for a play that not only concerns itself with theatre behind the scenes, but is also positively meta about it. Because although Nell Gwynn's remembered mostly as the King's mistress, this is if anything the "B" plot of the play.

Because while not quite the first female actor in London, she was the first to perform at Drury Lane; and unlike her biggest rival, it was her talent rather than her willingness to get her baps out that kept the public coming back. 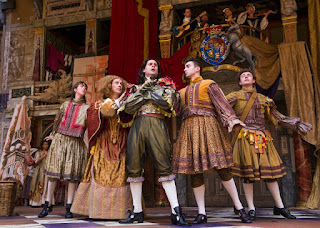 Structured as a Restoration play but exploding out of its confines, we open with novice actor Ned (Angus Imrie) making a hash of the prologue, and Nell (Gugu Mbatha-Raw) instantly endearing herself to us as she defends him. Leading man Charles Hart (Jay Taylor) spots potential in the orange-seller and former prostitute, and invites her to be their answer to the boob-flashing Moll who's given their rivals a boost. Soon she's drawing in the crowds, including Charles II (David Sturzaker,) who's keen to make her his latest mistress. He'll have to work for it though, and the play shows the fact that she's immediately a match for him as the spark for what becomes a genuinely loving relationship - if not a politically convenient one. 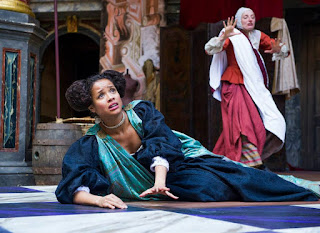 The play is much as I remembered it from last year, with some small rewrites that seem to have toned down the deliberate anachronisms and removed any reservations I had about it then. Luscombe's production sparkles from the off, with a frankly stunning pace that keeps the often very silly humour impressing relentlessly throughout. Its feisty leading lady gives the story plenty of bite, especially when she gets an inkling of a love rival: A visiting French aristocrat (Sasha Waddell) gets a very public mocking, but it's nothing compared to what the unseen Moll goes through thanks to a laxative-laced cake. It's a show almost entirely consisting of big setpieces and crowd-pleasing moments - with King Charles as a major character, even one of the spaniels named after him makes an appearance - which makes it all the more impressive that this never feels tiring, and the emotional moments are allowed to flourish as well. 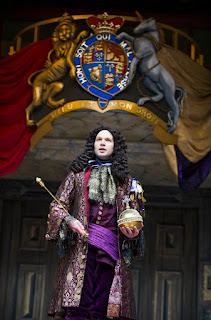 In her playwrighting as in her directing Swale is an unapologetic feminist, but never in a heavy-handed way: Instead she gives her male and female cast equal chances to shine: As well as a leading lady who can stand her ground against the best of them (and Mbatha-Raw has a twinkle in her eye that makes you feel you're in safe hands from the start,) Sarah Woodward gets dual comic cameos as a deranged Queen Catherine and Nell's mother - the latter getting in on James Garnon's usual territory by helping herself to a groundling's drink. On the side of the men, Graham Butler is a hack John Dryden with a fondness for plagiarising other people's work (even, in one of the sillier gags, work that won't be written for a couple of centuries yet.) And Greg Haiste's Kynaston reacts with unsurprising bad grace to the news that his usual role of leading lady is being usurped by an actual woman. 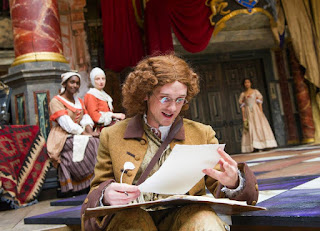 But the most frequent scene-stealing opportunities go to Amanda Lawrence as Nancy, the dresser whose eavesdropping, bluntness and eventual disastrous foray into acting make her a clear audience favourite. Swale is hugely talented but the fact that she's been given a production and cast to match makes Nell Gwynn the highlight of this summer's Globe season, a non-stop joy and a show you'd be mad to miss.

Nell Gwynn by Jessica Swale is booking in repertory until the 17th of October at Shakespeare's Globe.

*I'm still annoyed I didn't have a blog back when I saw This Is Our Youth. "Yeah, I know everyone's saying Hayden Christensen is going to be a big star because he's in the new Star Wars film, but personally I preferred his co-star - some bloke called Jake Gyllenhaal."
Posted by nick730 at 23:07