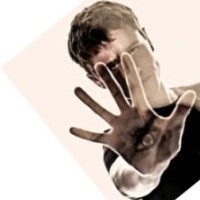 In only its second-ever staging of Greek Tragedy, Shakespeare's Globe goes straight for the big one, and the oldest extant piece of Western theatre, Aeschylus' trilogy The Oresteia. The Trojan War is over, and Agamemnon (George Irving) is on his way back to his kingdom. But his wife Clytemnestra (Katy Stephens) hasn't forgotten, or forgiven, what he did to get his victory: To guarantee fair winds Agamemnon sacrificed their youngest daughter Iphigenia. Ten years on, he will pay for it with his own life, when his wife's smiles hide a plan for bloody revenge. But in a family that's carried a curse for generations, violence breeds violence. Another decade passes and Agamemnon's son Orestes (Joel MacCormack) returns to the House of Atreus, intent on avenging his father's death in turn.

I don't like to make direct comparisons with other productions if I can help it, not while I'm watching a show and certainly not in reviews; but if the Globe was a room it would have an elephant in it, in the form of Robert Icke's radical production at the Almeida and now Trafalgar Studios. 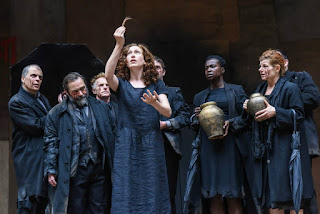 And it's really unlucky timing for the Globe because while it may not redefine the play to the same extent, there's certainly a lot that's interesting in Adele Thomas' superficially traditional, but actually quietly iconoclastic production. The long opening play, Agamemnon, is heavy on exposition and doesn't quite come to life but already Thomas starts to throw in some contrasting styles: The Chorus of elders are a naturalistic one in modern dress, but most of the named characters are in period dress, while Stephens' Clytemnestra is a stylised performance full of exaggerated gestures - the queen putting on a false front to her people while nursing murderous intentions. Cassandra's confusing prophesies, meanwhile, are delivered by Naana Agyei-Ampadu as a disjointed, jarring song, part of Mira Calix's disconcerting soundscape. 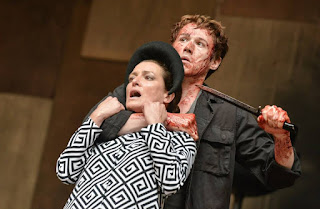 The energy and inventiveness ramp up from the second play, Libation Bearers, in which Electra (Rosie Hilal) and the titular Chorus - at one point in some very creepy masks - meet Orestes on his return, as he prepares to kill Clytemnestra and her new lover. Trevor Fox plays Aegisthus as perpetually drunk, flaunting his stolen power and making Orestes' actions seem slightly more justified. Rory Mullarkey's translation also makes it clear that the protagonist is in a Catch 22: If he fails to avenge his father, it's been prophesied the Furies will pursue him for it; but to do so he must kill his mother, so they pursue him anyway for the crime against his own blood. Ringu seems to be a popular influence on stage at the moment, as evidenced when the Furies appear in Eumenides and all look like Sadako, a group of damaged little girls baying for blood and swooping around the stage like a flock of birds - undermined a bit by tonight's audience laughing, but I personally thought it was a striking and creepy effect. 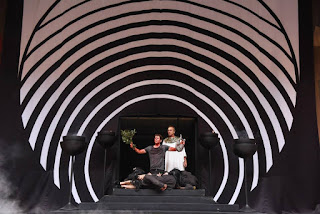 The visuals are generally one of the strongest points - after The Heresy of Love, Hannah Clark's set design is the second one this summer not to feel constrained by the Globe's distinctive stage, covering most of it up with plywood to give an apocalyptically distressed look (the musicians have been moved to one of the Gentlemen's Rooms, as their balcony is now completely covered up.) The costumes are mostly kept to monochrome, the better to show up the large amounts of blood that'll get spilt over the course of the evening. Mullarkey's translation allows for moments of comedy, and for the most part strikes a good balance between the classical format and more natural language, although there are exceptions - Clytemnestra dropping the word "knackered" into a formal speech feels out of place. It's also good, though, at making references that feel very current; especially when Athena's (a very disco-looking Branka Katic) offer of a home for the Furies is described in terms of welcoming migrants. 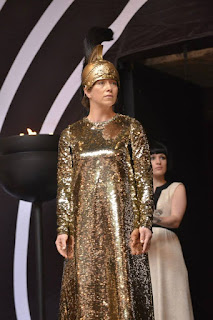 As you'd expect from one of the oldest pieces of literature in existence, The Oresteia's politics is very hard to square with modern attitudes, and even as it celebrates Athenian democracy and the courts of law (the season's key words of Justice and Mercy crop up frequently) it also very much endorses the idea that a man's life has more value than a woman's. Thomas deals with the play's misogynistic side by drawing attention to it: Iphigenia is barely mentioned in the second and third play, except by Clytemnestra, whose protestations Aeschylus treats as excuses. There's something almost subversive about how enthusiastically Thomas embraces Aeschylus' happy ending in which the patriarchy establishes its supremacy; we end on a satyr festival in place of the jig, and an unsubtle symbol of how the masculine has stamped its authority on the play. The fact that this isn't the best Oresteia in London at the moment is just bad timing; but still a show with a strong identity and some sharp ideas.

The Oresteia by Aeschylus in a version by Rory Mullarkey is booking in repertory until the 16th of October at Shakespeare's Globe.