Theatre review: Song from Far Away 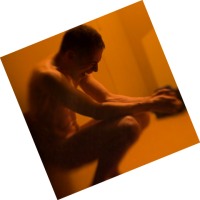 After making for the most celebrated venue/director pairing of last year, Ivo van Hove returns to the Young Vic; surprisingly, given he's been a big name in the Netherlands and internationally long before becoming a London favourite, this is his first time directing a new play, having made his name deconstructing classics. But Simon Stephens wrote Song from Far Away especially for van Hove and actor Eelco Smits: It's the monologue of Willem, a 34-year-old Dutch man who's lived in New York for the last 12 years. The play describes a trip back to Amsterdam that may be his first in all that time, and only happens when his much younger brother Pauli dies suddenly of an undiagnosed genetic heart condition. The visit back home will be a difficult one, and not just because there's a funeral at the heart of it: His family view Willem as a cold character who deserted them. (Some potentially NSFW imagery after the text break.)

And as we get to know him it seems they have a point: With a cynical view of Holland's famously liberal culture, and having just ended a relationship because he was sure there was someone better out there for him, Willem left and apparently never looked back. But in reality he's never stopped looking back to the ex-boyfriend he now realises was the best thing in his life. 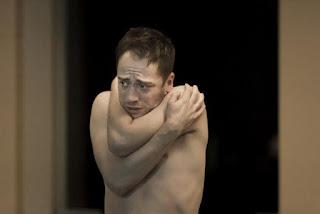 But while he's made a career for himself in New York, it's doubtful that he's made a life as well: The phone call to tell him Pauli's dead comes during a business meeting on a Sunday - which is exactly where he'd usually be then. There's no mention of any friends or social life, and his apartment is barely furnished, let alone decorated. It's here that he goes over the story in the form of letters he's written to his late brother, during the course of which he discovers the titular song (songwriter Mark Eitzel shares a writing credit on the show,) a tune he can't quite remember but pieces together over the course of the play. 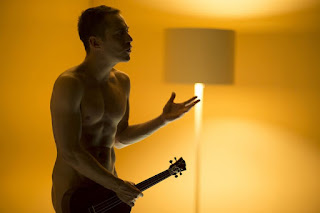 Stephens is a writer whose work can vary greatly in quality and has a tendency towards misery porn. But while this monologue could have suffered from a bleak outlook and a cold fish of a narrator - and might have in a lesser production - van Hove's sympathetic staging pulls you in, with help from the subtle and surprisingly varied lighting Jan Versweyveld has largely incorporated into his set. Yet the revelation here is Smits, a Toneelgroep regular, and I can only hope his director's new high profile in London means we'll get to see him in London often too. Because while Willem remains distant from everyone in his life, the brother he could never connect to while he was alive becomes an outlet in death. Smits doesn't just let us in with the big moments, there's also some smaller, lighter moments like his reaction to the eccentric - but ultimately successful - seduction technique of a Brazilian man he meets in a gay bar. 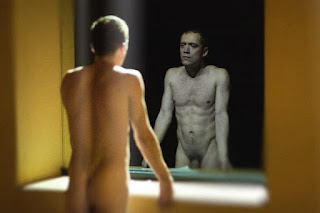 You could argue that having Willem literally strip naked as he starts to reveal more of his inner self (Smits'
FULL-FRONTAL MALE NUDITY ALERT!
lasts the whole last 45 minutes of the show) is a clichéd and obvious metaphor but in a production that's stripped down in every other respect as well it feels natural and not at all gratuitous. I wasn't sold on the show's final, ambiguous image, but thought Song from Far Away already convinced as the tiny tragedy of a man who, whatever he does after the lights go down, it won't involve emotionally connecting with another human being who's actually still alive.

Song from Far Away by Simon Stephens & Mark Eitzel is booking until the 19th of September at the Young Vic.