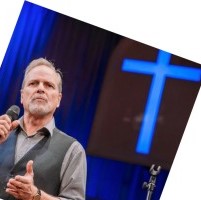 Post-show Q&As often unearth information that reveals much about more than just the production in hand - like the Gate's Artistic Director being an atheist whose mother is a vicar, a contrast he credits as one of the reasons he's often drawn to work with a religious theme. Such as his latest production The Christians, by American playwright Lucas Hnath. An additional draw in this case was the fact that Hnath's mother is also a preacher, albeit in an Evangelical church, and that's where, in an unnamed part of the US, the story takes place. Pastor Paul (William Gaminara) has spent 20 years building a congregation from the ground up, until it's become that most American of phenomena, a Megachurch with worshipers in their thousands. They got into debt to build it but they've finally paid it off, a fact whose timing will become of particular interest as the story plays out.

Because Paul chooses this milestone to preach a controversial sermon: He's come to believe that there's no such thing as Hell, and that eternal salvation is not solely dependent on belief. 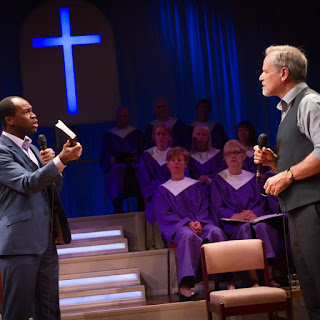 His Associate Pastor, Joshua (Stefan Adegbola) is a big believer in the price of sin, who's even been taking the church's youth group to bars to harass the clientele with threats of damnation. After a public confrontation with the Pastor, it's no surprise when Joshua leaves to start his own church, but Paul's positive message initially sees the majority of his flock enthusiastically supporting the new direction. Soon, though, questions start to be asked that his theological knowledge can't help him answer, and with even his wife (Jaye Griffiths) struggling to support him, Paul might lose everything. 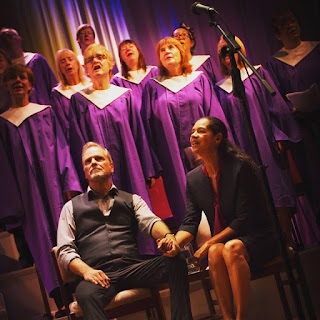 For an 80-minute show The Christians opens up a huge amount of topics without feeling bloated by them; not just about faith but also about community and the fragile nature of leadership. For me one of the central themes of the play is the way a religion based around love and selflessness can be dominated by interpretations centring on fire and brimstone and despair. Hnath lays bare the reasons for this when an Elder (David Calvitto,) representing the church's board of governors, is concerned that without the threat of damnation the congregation won't feel the need to keep coming every week and making their donations. Meanwhile having Lucy Ellinson appear in just one scene feels like luxury casting, but it is a crucial scene: As a Congregant whose loyalty to Pastor Paul has led to some difficult questions, she manages once again to be simultaneously funny and heartbreaking. 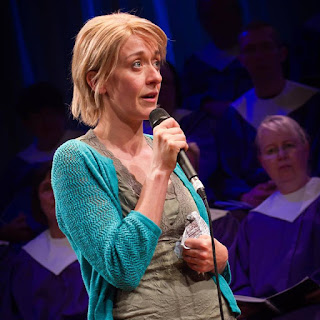 But Gaminara also impresses as the central character who narrates his own life falling apart around him, in a show with a very strong identity: Although not all the scenes actually happen in the church, the play is staged as if it's a service in a megachurch, complete with the characters speaking into microphones as they come up to say their piece, and a 20-strong community choir (tonight The West London Choir) on the stage. From the two pastors' very public theological argument over the literal meaning of scripture, to the fallout from what was intended as a message of hope, The Christians maintains an intensity that keeps it entertaining even as it provides food for thought, regardless of the audience's own faith or lack of it.

The Christians by Lucas Hnath is booking until the 3rd of October at the Gate Theatre.