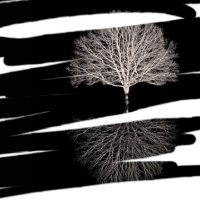 Bucking 2016's trend for interminable plays is Nick Payne, whose Elegy tells its story in 75 minutes - and that's with one scene being played out twice in its entirety. The setting is sometime in the near future, and Lorna (Zoë Wanamaker) has an unnamed illness that's causing her brain to rapidly degenerate; but medical science has found a cure. An implant can replace the damaged part of her brain and reverse the progress of her illness, but one thing it can't replicate are her memories: The surgery will remove everything she remembers of the last 25 years, a significant period as it includes the whole time she's known her wife Carrie (Barbara Flynn.) As the disease will very soon leave Lorna unable to make her own decisions, it's left to Carrie to use her power of attorney to see that her wishes are respected.

But that isn't necessarily easy when Lorna has asked to be allowed to die, and with a doctor (Nina Sosanya) singing the procedure's praises, she chooses to save her wife's life at the expense of her memories. 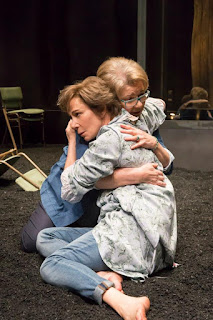 The decision is a foregone conclusion as Payne tells his story in reverse, starting with a Lorna who's ready to go back out into the world and start her life again but, despite having been told of everything that happened in her missing years, has been unable to find any memory of Carrie - or in fact any emotion for her whatsoever. 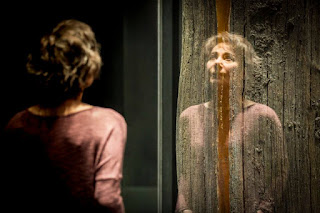 Following on from his other recent plays using science to tell a human story, Payne looks at a similar theme to Tom Stoppard in The Hard Problem, although Elegy doesn't come across as coldly as that play: The way personality is lodged in the physical brain, and what that means about the "soul" - does love exist only in a particular set of synapses? Carrie gambles that even if Lorna's memories of her are lost, her love will leave a mark, but as evidenced by the stranger who feels uncomfortable having her around, she's proven wrong. Elsewhere Payne questions whether surgically removing someone's faith is possible - explaining why the playwright is said to have consulted the Archbishop of Canterbury on the play's themes. 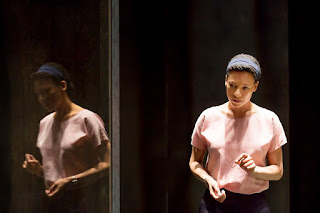 Josie Rourke's simple production lets the actors gently steer the story on a striking set by Tom Scutt, chairs from an impersonal waiting room set on burnt ground, dominated by a dead tree preserved like a museum exhibit, its glass case occasionally misted with dry ice as Lorna's mind fogs up. I'm not entirely convinced by the decision to play out the entire first scene again at the end - I think the audience could have been trusted to remember that the woman Carrie ended up saving turned out to be a completely different person to the one she thought she was saving. But generally Elegy is a nicely minimalist way of posing a question about how far science should go in interfering with who a person really is; and it does so in a quietly moving way, not just from the couple at the centre of the dilemma, but also from Sosanya's doctor, who reveals a very personal reason for being so keen to play god.

Elegy by Nick Payne is booking until the 18th of June at the Donmar Warehouse.