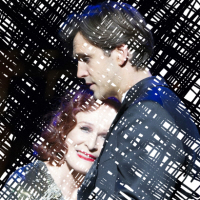 It's a bit unusual for a famous actor not to be particularly associated with musical theatre except for one specific role, but it's certainly the case for Glenn Close But No Cigar as Norma Desmond. Sunset Boulevard is one of Dr Baron Dame Sir Andrew Lloyd Lord Webber's best shows, largely because he and lyricists Don Black and Christopher Hampton have such strong material to work with in Billy Wilder's classic film. Now it becomes the second of the Coliseum's series of semi-staged concerts (after last year's Sweeney Todd,) and Close returns to reprise Norma in the same OTT outfits she stole from her last production twenty years ago. Close may be the star turn but Michael Xavier is barely ever off the stage as Joe Gillis, the struggling Hollywood screenwriter fleeing creditors when he hides in the driveway of a Sunset Blvd mansion belonging to a former silent movie star.

Propped up by fan letters forged by her creepily protective butler Max (Fred Johanson,) Norma believes she's still famous and beloved, and that a return to the screen is imminent. 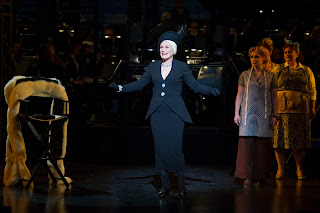 She hires Joe to script-doctor the bloated screenplay about Salome that she thinks Cecil B DeMille (Julian Forsyth) will direct her in, installing him in her house until he gradually becomes her kept man. Any suggestion that she's no longer a star is enough to send her into a rage but it's when Joe falls for young writer Betty (Siobhan Dillon) that she becomes really dangerous. 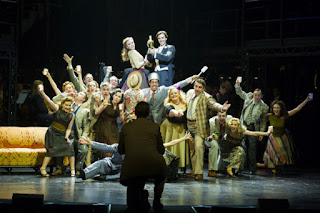 Lonny Price's production once again has the orchestra on stage, but once again the staging doesn't feel like a compromise between concert and theatre - staircases spider-web around the stage (set designed by James Noone,)  and there's a supporting cast providing backing vocals and a dance chorus. The main cast also includes Mark Goldthorp as as a movie executive and Haydn Oakley as Betty's fiancé, and there's a lot of strong performances. 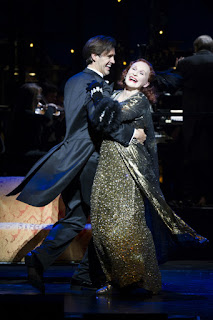 But everyone's there for Close, and she does deliver both in terms of undoubtedly filling the stage with star quality, and with some belting vocals. There's a few wobbles with the higher notes but if there was ever a role where that could actually be a plus, surely Norma Desmond is it. The last time I saw the show it was an actor-musician production, and the repetitive nature of the music did grate more then - having a full orchestra and the resulting richer sound probably helps with it not being as big a problem here; but I still think the final reprise of "With One Look" would have been more effective if we hadn't heard it quite so many times before. Sunset Boulevard delivers a decent musical, getting a strong production with a charismatic star turn.

Sunset Boulevard by Andrew Lloyd Webber, Don Black and Christopher Hampton, based on the film by Billy Wilder, is booking until the 7th of May at the London Coliseum.