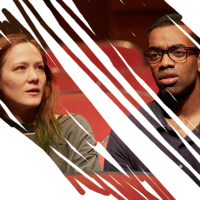 My Twitter feed's been bubbling over with excitement for months over the arrival of Annie Baker's The Flick at the National - which probably says more about how I've filled my feed with other theatre geeks than anything else, since this is far from headline-grabbing fodder, rather an incredibly slow and measured three-hander clocking in at nearly three-and-a-half hours. (At least the NT has offset the running time with an early start - almost as if they've heard of people with jobs to go to the next morning.) Sam Gold's original production crosses the Atlantic with a couple of the US cast in tow, and the Dorfman auditorium looks in on a whole other bank of empty seats as David Zinn's set is a small fleapit cinema somewhere in Massachusetts, the fourth wall where the screen would be. We're following ushers Avery (Jaygann Ayeh) and Sam (Matthew Maher,) and projectionist Rose (Louisa Krause) in the time between movie showings or after the cinema closes, as they clean up after the customers.

The play opens with Sam, 35 and never promoted from his job selling popcorn then picking it up off the floor a couple of hours later, showing the ropes to 20-year old Avery, a huge - and somewhat pretentious - film fan. 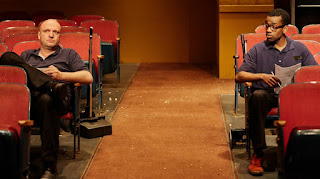 Avery's evangelical about screening prints on film rather than digital copies, and claims he only took the job at The Flick because the independent cinema is the only one in the county still to use an old-fashioned projector. The cinema owner has also resisted any electronic form of payment, making it easier for his staff to run a little scam on the side. He reluctantly joins in with what they call the "dinner money" scheme and so over the course of a few weeks we see him get to know his co-workers in an über-naturalistic show with more pauses than actual dialogue. 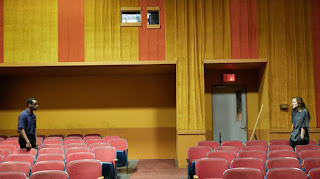 This is a character study done in half-sentences between people who wouldn't necessarily choose to spend time together and are in their various ways inarticulate - the lisping, hulking Sam is stuck in a dead-end job he knows is about all he'll ever achieve, and while Avery is educated, he's also crippled by depression*, while cool-girl Rose, the most confident on the surface, has insecurities of her own. It's also a play with a sour undercurrent of the "friendships" that people build up at work, but would be happy to betray in an instant if it meant saving their own jobs; and one heavily tinged with nostalgia for the days of films made on actual film (Bray Poor's sound design particularly evocative of movie scores in the blackouts between scenes, when the only light is the flickering projector.) 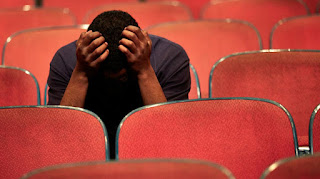 Baker and Gold's work is ambitious in its attempt to hold the attention for so long with only three characters (there are two more, both played by Sam Heron, but neither appears for long) and minimal action and dialogue - one scene is not only completely silent for several minutes, but the only action is brief glimpses of the actors behind the projection room window. And it's an ambition that for the most part pays off - Baker's dialogue remains gently gripping whether it's games of Six Degrees of Kevin Bacon or understated revelations about the characters' hopes and fears, and the cast commit to this perfectly. The first act's 1 hour 40 minutes passed by a lot more quickly than something as slow-moving as that had any right to, and if I didn't fall for The Flick quite as hard as many people obviously have, it's certainly a bold and impressive achievement.

The Flick by Annie Baker is booking in repertory until the 15th of June at the National Theatre's Dorfman.

*although "why are you depressed" is not a question you should ever ask; but Rose presumably doesn't know that
Posted by nick730 at 23:24