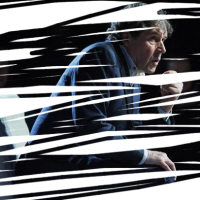 Artistic Director Vicky Featherstone is currently directing both shows at the Royal Court, and both feature people's minds being fractured by paranoia. X might take us to the future in the main house but Upstairs Cyprus Avenue is dominated by the past, and the sectarian Troubles that have defined Northern Ireland for centuries. Black comedies don't come much blacker than David Ireland's play about Eric (Stephen Rea,) an Ulster loyalist who's spent his life fighting the IRA and hating all Catholics. Now there's a peace in which neither side got everything they wanted, and he's not sure what the country's identity is or, by extension, his own. This crisis has been bubbling under the surface until he sees his newborn granddaughter and becomes convinced that she's actually Sinn Féin leader Gerry Adams in disguise, leading a charge to invade Protestant homes.

His animosity towards the five-week-old leads Eric's wife Bernie (Julia Dearden) to order him out of the house, but despite her anger his daughter Julie (Amy Molloy) tries to help him get over what is obviously some kind of mental breakdown - something she may come to regret. 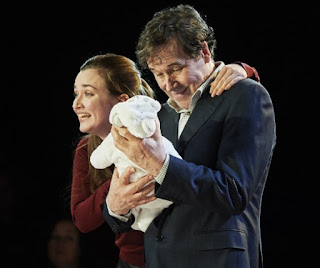 The play is narrated by Eric in a session with psychologist Bridget (Wunmi Mosaku,) and the first thing he ever says to her - and far from the last line to get a horrified gasp from the audience - sets up both the play's willingness to push boundaries, and Eric's utter lack of understanding of them. His prejudices are so deeply ingrained, he doesn't even recognise his hatred of "Fenians" as hatred. As a result a world where young Protestants and Catholics can mix is alien to him, and he keeps waiting for the other shoe to drop - hence his paranoia that Sinn Féin are infiltrating his home. 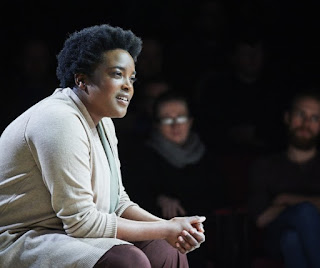 Having established Eric as a character with no internal filters, Ireland uses both this and everyone's reactions to him to great comic effect, as well as a mounting sense of the absurd. The comic highlight comes when Eric meets a deranged wannabe terrorist, Slim (Chris Corrigan,) who waves a gun around while his motormouthed diatribe takes in everything from religious dogma to the cinematic œuvre of Ron Howard (with particular reference to Far and Away,) and encapsulates the way Cyprus Avenue balances between broad comedy and danger. 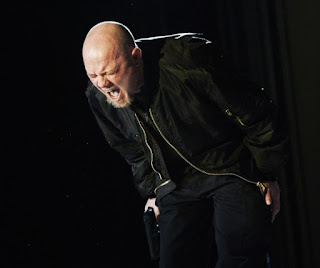 As the play goes on the danger looms larger, and it's hard to forget that we're in the Royal Court Upstairs, a venue with a history of things not working out too well for babies. Ireland does take his story to a very dark place by the end - tonight one audience member needed to run out at the play's climax, as the story turned brutal and the beige carpet of Lizzie Clachan's seemingly plain traverse set revealed a grisly twist. Rea impressively manages to imbue some kind of sympathy into the sociopathically blank Eric as he bumbles through with no sign of knowing there's anything wrong or even particularly unusual about his behaviour, and the play presents a sometimes hilarious, sometimes bleak picture of Belfast's identity crisis. Very funny but, fair warning, it's also very, very dark.

Cyprus Avenue by David Ireland is booking until the 7th of May at the Royal Court's Jerwood Theatre Upstairs (returns and day seats only.)