Theatre review: Harry Potter and the Cursed Child Part One 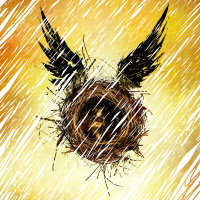 Shows are always plugging themselves as "the theatrical event of the year"- most recently Sunset Boulevard attempted the line, rather foolishly as if there's ever been a year when that title has had no contest, this is it: Harry Potter and the Cursed Child Parts One and Two were a phenomenon as soon as tickets went on sale, and now the show's actually opened the response has actually lived up to expectations. Playwright Jack Thorne is the first writer J.K. Rowling has entrusted to script an entirely new, canonical Harry Potter story, although she and director John Tiffany collaborated with Thorne on putting the story together. I chose to see this over consecutive nights so will review the parts separately too, although reviewing a show where it's important to #KeepTheSecrets is a tricky business. Ultimately this blog is a record for myself as well as reviews for others, so I will be giving it a go - so here's a little spoiler disclaimer:

After the text cut, expect some spoilers - I'll be mentioning some characters and their actors, and the general starting point of the plot, but I won't give away all the twists. Still, if you have any intention of seeing this show, I'd say - spoilering this review itself - I loved it, now don't read below the cut. Even if you won't be seeing it until 2017 or even until it makes it to Broadway, come back and read what I thought then - I can wait.

Leading up to seeing these plays, I re-read all seven novels again, starting last Christmas with Philosopher's Stone and timing it so I read the epilogue of Deathly Hallows on the bus to the theatre today. And, as the publicity images have suggested, that epilogue, quite unpopular at the time but now the starting point for a whole new adventure, is recreated as the opening scene of Cursed Child. 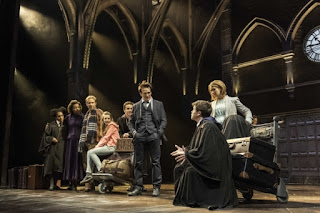 So a middle-aged Harry (Jamie Parker,) Ron (Paul Thornley) and Hermione (Noma Dumezweni) are dropping off their kids at Platform 9¾, two of whom are about to start their first year at Hogwarts. But Rose Granger-Weasley (Cherrelle Skeete) is soon off to do her own thing, leaving Harry's middle child Albus (Sam Clemmett) to make a new best friend, Scorpius Malfoy (Anthony Boyle,) son of his father's school enemy Draco (Alex Price.) They're both sorted into Slytherin (obviously, as it's the best house, an opinion in no way related to the fact that it's officially my house,) never really finding friends apart from each other thanks to Albus being considered to be the disappointing Potter for not ending up in Gryffindor, and failing at all the things his father was best at; and a persistent rumour that, somehow, Scorpius' real father is Voldemort (which, unlike the films, is pronounced correctly here, with a silent T.) 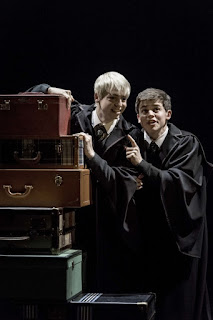 The tagline, inspired by that epilogue, is "19 years later," but most of it so far takes place 22 years later, with a 14-year-old Albus and Scorpius in their fourth year at Hogwarts. After the destruction of all the time-turners in Order of the Phoenix, a former Death Eater has created a new one, and one which doesn't have limitations on how far back it can be turned. Harry - now head Auror - and Hermione - now Minister for Magic - have captured it, but the boys steal it with the intention of changing a major death from the original story, specifically the most pointless one, that of Cedric Diggory. They believe that by going back to the Triwizard Tournament and scuppering his chances of winning, he can be prevented from becoming "the spare." 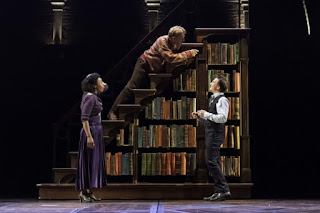 There's a few more new characters thrown into the mix - most notably Esther Smith as Delphi, the late Cedric's cousin and Albus' big crush - but Part One strikes a balance between new story and nostalgia for the original series, so although so far it doesn't seem like Hagrid has much to do with Albus' story, we do see him when Harry has a flashback dream. When I saw Chris Jarman was in the cast I said it would be criminal if he wasn't playing Hagrid (he's a large, friendly man missing a few teeth, basically he is Hagrid,) and I was pleased to see I was right. even if it's essentially a cameo. The series' moving paintings mean we get Dumbledore, of sorts, and then there's the time travel element - yes I did spot Snape in the sidelines at the Triwizard Tournament. Probably the best recurrence of a much-loved character, and the most enthusiastically greeted by the audience, was Annabel Baldwin's Moaning Myrtle. I particularly liked the fact that the scene referenced that Myrtle was close not only to Harry but also to Draco when they were at school; also given Rowling only confirmed Dumbledore was gay outside of the books, it's great to have a little canonical confirmation that Hogwarts does have gay students, as Myrtle casually mentions that boys as well as girls would come to her bathroom to swoon over Cedric. 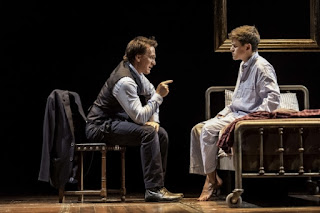 Harry's relationship with his middle son is a difficult one, and I really liked the fact that Draco, the bad guy for so many of the books, is blatantly the better father: Harry has a son who isn't what he expected and has no idea how to deal with this; Scorpius is bookish, awkward, and a follower rather than a leader, so also not remotely what Draco wanted or expected but his father is still fiercely protective and accepting of him. Parker, Dumezweni and Thornley are perfect as the original trio - and without giving too much away, in a couple of different ways they have to play both recognisable and not-so-recognisable versions of the familiar characters. But Cursed Child, in Part One at least, is mostly about the next generation, and Clemmett and Boyle make Albus and Scorpius instantly some of the most beloved characters in the series with their awkward and genuine relationship. In a show with a lot of special effects, I think the scene of the pair on Hogwarts' moving staircases trumps more technical moments as one of the most memorable scenes, and possibly the most moving. 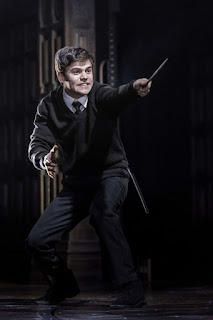 And all this is without me even going into any detail about Tiffany's spectacular production. I'll try and give the technical team their due more tomorrow, but a few of the more memorable moments have to be:
- The recurring special effect of the Time Turner - one of the best uses of projection I've seen, because you're not initially aware there even is a projection.
- The entrance into the Ministry of Magic through the phone box.
- The underwater sequence.
- Harry and Draco's duel - some of the most "magical" moments are when Tiffany and movement director Steven Hoggett are overtly theatrical without trying to disguise the fact under special effects.
- Floo Powder - the actors have to get up very quickly before the flames come back.
- Commitment to a gag - like giving the Trolley Witch, a character from the books too minor to even have a name, an elaborate backstory and powers.

Oh and, as well as Chris Jarman as Hagrid, I also correctly predicted by looking at the cast list who one of Helena Lymbery's characters would be. Yeah, that one.

Harry Potter and the Cursed Child Part One by Jack Thorne, based on a story by J.K. Rowling, Jack Thorne and John Tiffany, is booking until the 10th of December 2017 at the Palace Theatre (returns and rush tickets only.)