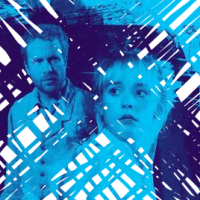 This may be Young Chekhov but it's already time for a midlife crisis play in the middle section of Jonathan Kent's productions of David Hare's translations. Ivanov (Geoffrey Streatfeild) is 35 and depressed, feeling trapped in his home with consumptive wife Anna Petrovna (a completely different Anna Petrovna but again played by Nina Sosanya, showing range as she goes from educated woman to completely dependent on her husband's attention,) and his bombastic uncle Count Shabyelski (Peter Egan, from the 1980s.) As with the characters in Platonov, property doesn't always come with the money to maintain it, and Ivanov is hugely in debt to the two women who between them control the town's finances. Ivanov begins an affair with Sasha (Olivia Vinall,) daughter of his main creditor.

The Count, meanwhile, is considering marrying the other loan shark, wealthy widow Babakina (Emma Amos,) who quite fancies adding a title to her money. 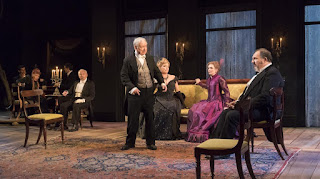 I've only seen Ivanov once before and didn't like it, particularly its profoundly self-centred lead. This is an improvement though, Hare, Kent and Streatfeild more successfully finding the raw depression consuming Ivanov and making him act so selfishly as to start wooing a second wife under the dying first wife's nose. Ivanov is still unlikeable but at least he's a bit more understandable. There's also an interesting idea about the way he's been plagued by rumours about marrying for money, and whether everyone expecting him to be a certain kind of person had turned him into that. 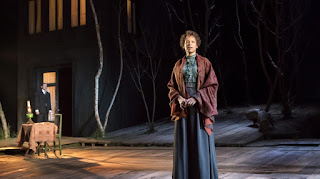 And while the lead is full of despair Kent again provides a lot of humour around him - Chekhov's labeling of many of his plays as comedies doesn't always translate to the 21st century stage but Des McAleer's manipulative wheeler-dealer, Debra Gillet's miserly harridan, Mark Penfold's dusty, downtrodden old butler and Beverley Klein's busybody all provide comic moments. 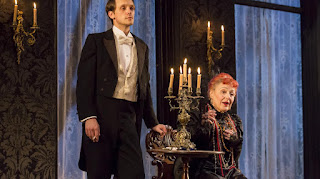 James McArdle's had a shave between shows to provide an upright, uptight Doctor Lvov, a man of much self-proclaimed morality but ultimately quite a sinister figure who feeds off setting everyone else against each other. Although not as rare as Platonov, this second play isn't as frequently seen as Chekhov's later work, and it does at times feel repetitive in the way Ivanov expresses his angst. There definitely is a sense of progression in the playwright's writing though, a tighter plot, fewer extraneous characters, and the attempt to explore a naturalistic kind of human psychology is starting to bear fruit.

Ivanov by Anton Chekhov in a version by David Hare is booking in repertory until the 8th of October at the National Theatre's Olivier.

Chekhov's Gun Watch: One "I'm pointing a loaded shotgun at your head for the bantz, LOL," one successful suicide.