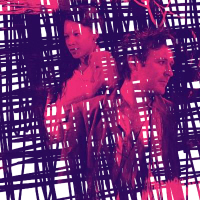 Another theatrical marathon day as a trio of productions originally seen in Chichester come to the Olivier. Jonathan Kent directs David Hare translations of Anton Chekhov's early work, grouped together and played either individually or in one day as Young Chekhov. First up is the playwright's first, unfinished full-length play Platonov, in which a rural community deal with twin obsessions of sex and money - too much of one and not enough of the other. Cash is thin on the ground for the upper-class widow Anna Petrovna (Nina Sosanya,) who's running her late husband's estate entirely on loans from local loan shark Shcherbuk (David Verey,) but she's still a young woman and the wealthy Porfiri (Jonathan Coy) has proposed. But Anna only has eyes for the same man all the other local women do.

Mikhail Platonov (James McArdle,) once the resident revolutionary firebrand and still prone to angry political rants, has settled for a life as a schoolmaster with a wife, Sasha (Jade Williams,) he has little respect for. 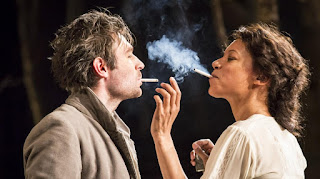 Scruffy and grumpy, he still seems to be catnip to Anna, her stepson's wife Sofya (Olivia Vinall,) and even the seemingly timid Maria (Sarah Twomey.) He's unable and unwilling to take any responsibility for his part in their seduction, but even when it's labeled as a comedy, a Chekhov play will have a fairly dark comeuppance waiting for him. 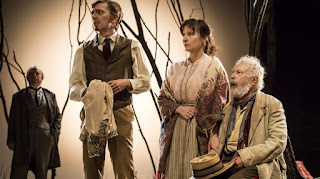 On a wild-looking set, all mismatched wood and murky water, by Tom Pye, McArdle plays Platonov with untamed hair, eyeshadow and a swagger that suggests Russell Brand might be an inspiration for this modern take on an unlikely lothario. The play took a while to warm to despite the strong cast - also including Joshua James as Sacha's brother, an especially inept and unenthusiastic doctor, and Mark Donald as Porfiri's foppish son - because its characters really are predominantly fond of very cruel humour at each other's expense. The comedy gets sillier but also more palatable after the interval as Platonov's chickens start to come home to roost. 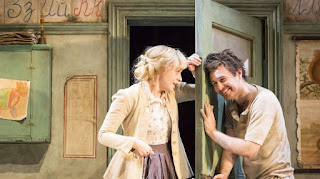 The text of Platonov would run for several hours if done as the playwright left it, so part of Hare's job adapting it has been to edit it down and craft a story out of it. It's made for a sometimes charming but not entirely satisfying play that shows the playwright still finding his style - something putting these three plays together will hopefully let us watch develop as the day goes on.

Platonov by Anton Chekhov in a version by David Hare is booking in repertory until the 8th of October at the National Theatre's Olivier.

Chekhov's Gun Watch: A couple of shots into the air, one into a person.