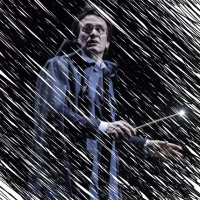 Tonight it's Harry Potter and the Cursed Child Part Two, and as with Part One of J.K Rowling, Jack Thorne and John Tiffany's story I'm going to to do a review with some degree of spoilers, a little bit spoilery for plot, a bit more so for characters and staging, as a record of my reaction for myself if nothing else. So read on if you've seen the plays already or are involved in the production and already know everything; or, I guess, if you're absolutely sure you have no intention of ever seeing it either at the Palace or when it eventually opens on Broadway and, probably, territories all around the world. If you have tickets, are planning on going to see it or there's any chance you might some day, #KeepTheSecrets and stop reading after this paragraph.

Because obviously the starting point of this play is the massive cliffhanger we got at the end of the first one, which means the show is very much on Anthony Boyle's shoulders as Scorpius has to try and get back to his own reality, and to bring Albus (Sam Clemmett) back into existence. 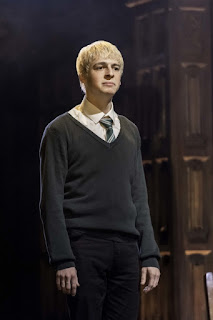 We had a taste of alternate realities in the first play but this third act is very much the Back To The Future Part II of the Harry Potter series, and we get yet another opportunity for Noma Dumezweni to give us an alternate take on Hermione: The darkest yet, this is essentially the ruthlessly pragmatic fighter side of her becoming dominant because it has to, the side of her who made her own parents forget her in Deathly Hallows; but it's also a more recognisable and likeable alternate Hermione than the ones from the second act. Paul Thornley meanwhile provides a a light touch to this darkest of the four acts, because while Hermione is more adaptable than she might initially appear, Ron will always be Ron. This is also an opportunity to bring a dead character back for a more extended visit, as this is a reality where Snape (Paul Bentall) is still alive and undercover. 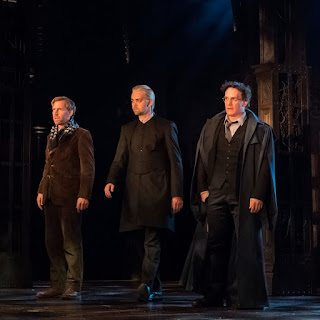 This act also best exemplifies the commitment the entire production team - and everyone front of house - has to making this as immersive an experience as you can create in a traditional West End proscenium arch theatre. The theatre was dark for a couple of months before previews started and the whole building has been kitted out in Hogwarts wallpaper, but between the two parts when we're in the dark alternate universe, not just the stage but front of house also get kitted out in the new Dark Mark logo, which also suddenly becomes available on T-shirts and key rings on the merchandise stand. The ushers all wear house ties for most of the play (except when they, too, change into the Dark Mark for this section. 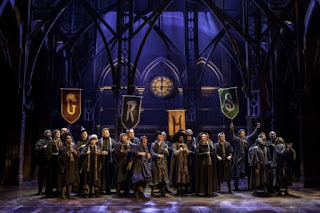 This new, angular design of the Dark Mark, that fits in with the simplified redesign of all the house logos, is part of Christine Jones and Katrina Lindsay's very effective set and costume designs that feel very authentically Hogwarts while departing drastically from the imagery of the books and especially the films to give Cursed Child an identity of its own that's still absolutely Harry Potter. The Sorting Hat (Chris Jarman) lurks around the sidelines throughout the plays as if keeping an eye on the friendship it cemented in the opening scenes, and this is another departure - the tatty wizard's hat even Rowling's original books describe is now a bowler. The extension of the design into the auditorium itself reveals yet another surprise as we get to the final act and a classic reveal of a new villain in the style of the first and fourth books. 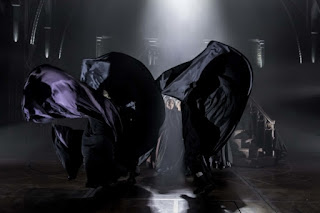 Imogen Heap follows suit in giving the music an entirely different identity to what people who saw the films might be expecting, urgency replacing bombast. Her work combines with that of Steven Hoggett, the other creative to have put a very distinctive touch on the production: As with The Pass John Tiffany has made dance-like movement an integral part of the show, and Hoggett's work, all swishing capes and determined stomping, makes the scene changes as intense as the action, not letting the energy flag. Finally there's Neil Austin's lighting, providing lots of shadow for atmosphere (and to help Jeremy Chernick's special effects and Jamie Harrison's illusions conceal their workings) without making the show murky. 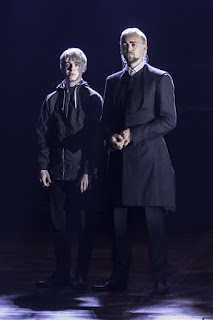 Though Boyle and Clemmett are still central to the action, Harry (Jamie Parker) and the other adults get more of an active role in the story now as they try to save their sons from the trouble they've got themselves into - Poppy Miller is a spot-on Ginny, by which I mean she says something feisty once per play then fades into the wallpaper the rest of the time AND THAT IS THE VERY DEFINITION OF GINNY. If Part Two doesn't always feel quite as strong as Part One it might be that the alternate realities we've ended up in have started to make it feel episodic. This does get wrapped up though in a final act that takes us back to the heart, not just of Cursed Child, which is the relationships between the boys and their fathers, but also of the whole series, finally revealing that this often unlikeable take on Harry himself is never quite going to be able to shake off the trauma of his teenage years, but his relationship with Albus at least is reparable. 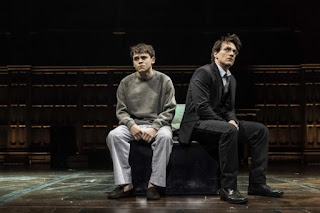 Jo Rowling is so fiercely protective of her wizarding world that she's spent years nixing stage versions, so I was never too worried that Harry Potter and the Cursed Child would be a cynical moneymaking exercise. But the sheer love for the world it inhabits, and attention to detail, are even more than we might have expected - this is a show that'll be representing British theatre to the world for years and probably decades to come, and it couldn't have done so better.

But yeah, the show's logo of a child in a nest that's also a snitch... that doesn't mean anything.

Harry Potter and the Cursed Child Part Two by Jack Thorne, based on a story by J.K. Rowling, Jack Thorne and John Tiffany, is booking until the 10th of December 2017 at the Palace Theatre (returns and rush tickets only.)