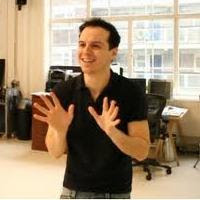 Diversifying just a tiny bit from theatre reviews, I don't think I'll be going so far as to review films with a theatrical connection but direct stage-to-screen transfers might occasionally pop up (I haven't decided yet whether the forthcoming BBC Histories will fall into this category.) A bit more straightforward is the filmed version of a show I missed a couple of years ago when it played the Bush, Simon Stephens' Sea Wall. And it's not bad timing as it's a monologue for Andrew Scott, who's back in people's minds at the moment after last night's Sherlock finale. Like most monologues it's a tricky one to review without giving too much away - however much the narrator might veer off the subject, as a dramatic form it tends to be pretty to-the-point. But it's probably not too spoilery to say it builds to a heartbreaking conclusion, from the start it's clear Alex's (Scott) amiable reminiscences about his family, specifically his wife, daughter and father-in-law, are leading up to something devastating.

For this filmed version the audience is replaced with a video camera Alex has set up, which is apt as at its heart the monologue is a confession of what he believes is one of the worst things he's ever done, the video could easily be a message he can't bring himself to say to someone's face. Monologues always end up being most memorable for the actor's performance as there's nowhere for them to hide so it's worth noting first that Stephens has written (and co-directed, with Andrew Porter) a multi-layered script that gives Scott so many different elements to play with, including one seemingly callous comment that many might have shied away from for fear of it making their lead unsympathetic, but which felt painfully real to me. While I'm sorry to have missed this live, it must have been pretty intense, Scott laying himself open just as much as the script does. I know there's a a few people who remain unconvinced by Scott's Moriarty, which was of course a very deliberately arch performance; if you're among those people Sea Wall should make you think otherwise, and for £3.50 to download is surely worth a go.

Sea Wall by Simon Stephens is available to download from seawallandrewscott.com.