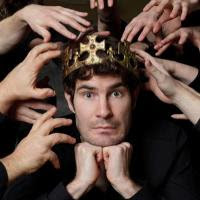 First Shakespeare of 2012 and the "feast or famine" theme from last year is still going strong - I've only seen King John once before, about ten years ago, but there's already two productions lined up. First up, the Union Theatre in Southwark. With Richard the Lionheart and his brother Geoffrey both dead, the crown has passed to runt of the litter John (Nicholas Osmond.) But in the unending conflicts between the neighbouring nations, the King of France (Damian Quinn) is supporting a claim by Geoffrey's son, Arthur. The main recollection I have from the last time I saw the play was it being surprisingly funny, and Phil Willmott's production goes full throttle for the comic potential in this play of political machinations - though there are battle scenes, this is essentially a story of deals and allegiances, and of the two countries' fates being pushed around by the Church's insistence on being obeyed. (At one point, having just suppressed a peace deal, the cardinal (Michael J Hayes) sits calmly eating a cake in the middle of the chaos he's just reignited.) Willmott avoids letting these political dealings drag by injecting a lot of pace as well as using some Gooldian overlapping scenes.

In its unexpected tone, which must make it a hard one to promote, and the political back-and-forths of the story, I can see on the one hand how King John remains comparatively unpopular; but there's other elements that you'd have thought would make it popular in performance, like the faint tone of absurdity and the relatively good roles for women. There's the feisty Eleanor of Aquitaine (Maggie Daniels) and Geoffrey's widow Constance (Samantha Lawson,) constantly interrupting peace talks and sometimes literally pushing her gormless son Arthur (Albert De Jongh) towards an English throne he's clearly as uninterested in as he is unsuitable for.

Embracing the story's ridiculous side can make performances tend towards the large side - Rikki Lawton as John's illegitimate nephew makes a risky performance choice with mixed results: At times his relentlessly hyperactive Philip The Bastard is a bit one-note, and feels like he's courting audience approval too much. But then there's times when this energy is an absolute gift to the role, especially in the second half. In fact although the first half is decent, it's after the interval that the show really comes to life. Osmond's John also comes into clearer focus, in essence an ambitious middle-manager whose reactions to the problems of power are woefully inadequate but who won't let this stop him from clinging on to the crown, even after his death. There's a healthy-sized cast for a fringe venue so while a slow starter, this King John ends up being a clear and entertaining production that in its modest way throws down the gauntlet to the RSC's upcoming version this summer.

King John by William Shakespeare is booking until the 11th of February at the Union Theatre.