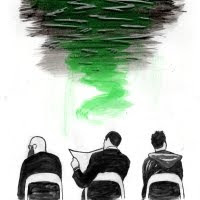 Conor McPherson's Port Authority shares a format with another Irish play I saw last year, Terminus: That of three monologues delivered in alternating sections. This time all three of the performers are men, of different ages. Kevin, (Andrew Nolan,) in his late teens or early twenties, has only just moved out of his parents' home, into a shared house whose other residents include the girl he's in love with. They're both seeing other people, and though at times there seems to be a spark between them, it looks unlikely they'll ever do anything about it. Dermot (Ardal O'Hanlon) is middle-aged, prone to drinking too much and rather contemptuous of his wife and all the weight she's put on. For reasons that elude him, he's been handed a huge promotion he's not qualified for. Sitting between the two in his motorised wheelchair is Joe (John Rogan.) He receives an unexpected package at his old people's home, which leads to reminiscences about a neighbour he once believed himself in love with, despite hardly knowing her.

McPherson's three stories are only very tenuously connected, though you can see the thematic similarities - there's a lot of regret here, often centred on the women they do end up with just as much as the ones that got away. While still the liveliest and cheeriest of them, Nolan's character may in some ways be the most tragic - though still at the start of his life, he's already making decisions that he knows he'll come to regret. As Kevin would put it, these three men share the same soul, and it's not a fighter's.

With plays structured in multiple storylines you're always looking for them to come together in some significant way. Port Authority's connections remain a bit vaguer than that (and the title's meaning eludes me) but this doesn't make for a disappointing end result. The individual stories are interesting enough, and the performers intense enough, that there's plenty to take from the evening. Director Tom Attenborough has kept all three actors sitting still for the whole thing, on Francesca Reidy's simple set of wooden palettes, but I didn't find it visually boring. Perhaps the amount of gesticulating, which I guess is indeed quite an Irish trait, helped with that. (Or maybe I just didn't mind looking at Nolan, who is a bit lovely.) Ian said he'd been trying to figure out why, despite being interested in all three narratives, he felt most invested in Dermot's, and that he realised it was because O'Hanlon was making a huge amount of eye contact. This is certainly very effective, although I will say we were in the front row, and he seemed to be looking at the front few rows almost constantly, so it may well be that people sitting further back didn't feel the same connection. Still, three excellent performances in a lyrical play that invites a certain amount of personal interpretation.

Port Authority by Conor McPherson is booking until the 18th of February at Southwark Playhouse's Vault.