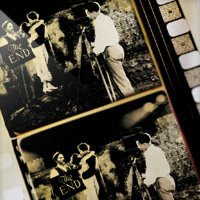 Only a few months after the rather good The Last of the Duchess, another new play from Nicholas Wright, Travelling Light. Or, as I couldn't help thinking of it, Cinematographer on the Roof, since it sees Antony Sher channel his inner Tevye. Sometime in 1930s Hollywood, film-maker Maurice Montgomery (Paul Jesson) looks back on the early days of cinema when he was still called Motl Mendl, a minor journalist trapped in the almost-entirely Jewish village of his birth, in an unnamed part of Eastern Europe. (Christopher became rather fixated with figuring out the precise geographical location and was planning to scour the programme for clues. I was happy to accept that the story's fable-like nature meant the location was deliberately nebulous.) There, as he tells it, he more or less single-handedly created the motion picture industry. 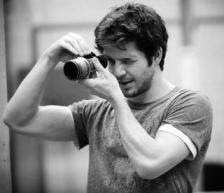 One of the reasons I was keen to see this was because Motl is played by Damien Molony, who (as of the 5th of February) will be the new male lead in one of my favourite TV shows, Being Human. Fortunately he makes for a strong lead, his character is something of an amoral charmer which Molony pulls off very well. On a shallow note he's also pretty easy on the eye, and when his bare legs appear in a couple of scenes, that's not a bad thing. Nice toes too. What? It's a thing. The supporting cast is strong although Sher comes uncomfortably close to caricature. The real problem is the play itself. Wright's conceit is to play out the story of movies in microcosm in this little village. So Motl is the fractious director, Jacob (Sher,) the local mill owner who bankrolls the films represents the producers and Anna (Lauren O'Neil,) the girl they both have their eye on, the starlet. A small group of locals asked for their opinion become the first focus group, and soon everyone starts to stick their oar in. It's a simple conceit, too simple to carry a two-and-a-half hour play. By halfway through the first act we've got the idea, by the second act it's been stretched well past breaking point. Jesson looks awkward in the half-hearted framing device, his occasional, unnecessary interruptions of the action by wandering in through a back door are pretty twee. It also leads to a very problematic ending: I fully appreciate that the end is a reference to the convoluted twists in exactly the kind of melodrama these film-makers were producing; but irony only takes you so far and this is the ham-fisted ending we're left with.

Don't get me wrong, there's a lot of amusing moments of gentle humour. But gentle is just it, Travelling Light is a pretty slight piece that feels lost on the Lyttelton stage. I found it a really odd choice of play for the National to be staging, with Nicholas Hytner himself directing. Funnily enough Christopher had the exact opposite comment, that he found it typical, light post-Christmas National fare. At the interval, though we both saw flaws and upsides to the play, Christopher seemed slightly more positive about it. By the end though we were pretty much in agreement that this was an idea that might just about carry a one-act play, but ran out of steam in a full-length one.

Travelling Light by Nicholas Wright is booking in repertory until the 6th of March at the National Theatre's Lyttelton; then touring to Salford, Leeds, Aylesbury and Newcastle.