Theatre review: The Trial of Ubu 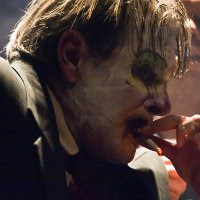 Though I'd heard of absurdist classic Ubu Roi I've never seen it, so had a quick online search about it before going to see Simon Stephens' sequel of sorts, The Trial of Ubu. In fact Stephens opens his play with a recap, in puppet form, of Alfred Jarry's play and the fictional dictator's crimes, which gives us the background, as well as allaying the fears of anyone worried that the dog from the Family Ties end credits had been put on trial. This Punch and Judy show is an apt way to tell the crimes of Ubu, the original play having been a satire with a decidedly juvenile side (Jarry started writing it aged 15.) Stephens' twist is to have Ubu tried at the International Criminal Court, the century since the original play having furnished us with real life dictators whose atrocities make him seem less far-fetched.

Stephens teams up with director Katie Mitchell again, and although Ubu himself (Paul McCleary) does appear, it's only very briefly. Instead we almost entirely experience the trial through a pair of translators in their booth (Kate Duchêne and Nikki Amuka-Bird.) I can see how this approach will alienate people who feel robbed of the courtroom drama, but it's certainly an effective way of making the audience view the dark events described from a Brechtian distance. It also means we get a glimpse of how hearing these things recounted day in day out affects people just doing their job. It's a huge ask for the two actresses, Duchêne and Amuka-Bird carry the show not only by speaking out the dialogue of Ubu, his wife, his various generals and victims as well as all the legal teams, but also by giving us an idea of the personalities of characters who have no dialogue as themselves. We do get a glimpse of Ubu himself with his jailer (cute Rob Ostlere) as well as a couple of lawyers (Josie Daxter and George Taylor) disillusioned with the process itself, and so Stephens asks questions about who exactly these things are meant to be for. The opening puppet show proves to have been a good idea as we hear how grotesque comic horrors translate into reality - most notably a gag involving people being chucked down a trapdoor, and what that turns into once taken literally.

With such a strong conceit in the play itself Mitchell doesn't overburden the production with more big ideas but has gone for attention to detail in a clear presentation, the matter-of-factness echoed by Lizzie Clachan's set which extends the Hampstead Theatre's wood panel decor onto the stage. The huge chunks of speech by just two actresses do mean that despite their efforts there were occasional dips in my interest, but considering the format this was a surprisingly small percentage of the time. I can easily see why people might hate this piece (tonight's half-empty theatre was reminiscent of the "bad old days" of two years ago; I could make a comment about the consequences of Hampstead unceremoniously ditching their early booking incentive after a single hit season but.... I just basically did.) But while I wouldn't rush to see The Trial of Ubu again, I'm glad I did go.

The Trial of Ubu by Simon Stephens is booking until the 25th of February at Hampstead Theatre.