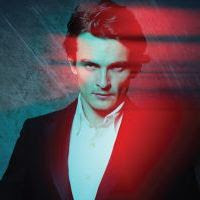 Is Dennis Potter due a revival? The last time I remember there being much of a high profile to his work was just after this death in the mid-90s. Maybe Amelia Sears' production of Brimstone and Treacle could be the start of a reevaluation of his work. This has been a long time coming for me, I first saw a production of the play in Edinburgh 18 years ago, and when I still harboured a desire to work in theatre myself it was on my wish-list of plays to direct. I may have taken myself out of the running but I'm more than happy to settle for Sears' straightforward, tight production that keeps the 1970s setting and doesn't impose any high concepts on the play - but then, Brimstone and Treacle has quite enough going on by itself.

Pattie (Matti Houghton) was hit by a car two years ago and is now in an almost vegetative state, only able to emit grunts and moans. She needs constant care, provided by her mother Amy (Tessa Peake-Jones) who barely leaves the house any more. Her father Tom (Ian Redford) thinks Pattie is an empty shell, but religious Amy convinces herself there's signs of recovery, and prays for a miracle. Enter Martin (Rupert Friend,) who arrives to return Tom's "lost" wallet, and claims to have been a friend of Pattie's before her accident - maybe more than a friend. His sickly sweet approach to Amy (calling her "Mumsie," "ducky" and "lovey") and offer to take care of the sick girl so her mother can get a break, lands him an invitation to stay with them for a while; the initially suspicious Tom starts to be won over as well when Martin claims to agree with his racist views.

The thing that's always most drawn me to Potter's work is the way his religious upbringing feeds into what he wants to say, and it feels like it's rare to get an Anglican writer whose relationship with religion forms as big a part of his writing as Potter's does. So although there are other elements to Brimstone and Treacle, its the writer's religious preoccupations that always stand out to me most. The play is partly about the randomness of good and evil, the fact that religious promises of good things happening to good people don't come true, and centres on he idea of an "evil miracle." Martin is the only character in the play who is aware of the audience (this production has these moments of eye contact punctuated by the lights flickering,) a device that points to his possible metaphysical nature: He's either a con-man with delusions of being a demon, or he actually is a demon, and it's up to us to decide which it is, and indeed which is scarier (one reason I'm not crazy about the original TV play is that it actually makes the choice for us.) This device also allows Martin to take the audience into his confidence, laugh along at his taking the Bates family for a ride, meaning we're uncomfortably complicit when it's revealed just how twisted and dark he's going to become as the play goes on.

The play is though, in many ways, a black comedy, which the cast play up to - Peake-Jones is amusing and heartbreaking in equal measure as Mrs Bates, a bit dim and a lot put-upon so desperate to embrace the possibility of Martin being her own personal miracle. Friend is suitably otherworldly although there's one scene I wasn't convinced by: When Martin takes Mr Bates' "England for the English" attitude to its natural extreme of concentration camps and violence, Friend felt too in control to me, as if he actually wanted Mr Bates to give up the National Front, which is what happens. But really this should be an accident, Martin trying to lead Tom to extremes of evil but having a sobering effect instead - a more down-to-earth version of the "evil miracle" that ends the play. Indeed, Martin then expresses disappointment at the result, but it looked like he was trying to engineer it all along so it comes across quite confusingly. Admittedly, my familiarity with the play may be making me over-think things.

Houghton is great in the thankless role of the constantly-onstage, drooling and gabbling Pattie (and in fact all of Pattie's "gibberish" grunts are very specifically scripted by Potter.) Redford is also well-cast as the domestic tyrant and Alex Eales' set design is horribly claustrophobic.

Obviously this has ended up rather an odd review what with all the baggage that I bring to the play but in case it wasn't clear this is a recommendation from me, a powerful, disturbing play that I love, that's been given an excellent treatment here. (My theatre companion for the evening would disagree - Richard actually found it boring in parts. Honestly, why do I even go to the theatre with him when he's so clearly wrong about everything?)

Brimstone and Treacle by Dennis Potter is booking until the 2nd of June at the Arcola Theatre's Studio 2.