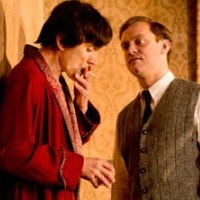 Having premiered in a touring production a couple of years ago, Mike Bartlett's tragicomic Love, Love, Love finally makes it to London in a new production at the Royal Court. Looking at the "baby boomer" generation that now famously made more money than both their parents and their children, it follows Kenneth (Ben Miles) and Sandra's (Victoria Hamilton) relationship from the 1960s to the present day. We first meet Ken as a teenage student, living in his stuffy, old-fashioned older brother Henry's flat. When Henry (Sam Troughton) brings home the girl he's been seeing, the hippieish, feminist Sandra takes more of a liking to his Beatles-loving little brother, and they bond over "All You Need Is Love" (according to Ian, the people sitting behind us were muttering in surprise that the song echoes the repeated word of the title, as if Bartlett might have named his play by accident.) A little over twenty years on we find the pair married, with two teenage kids who will very literally get caught in the middle of their parents' crumbling relationship. 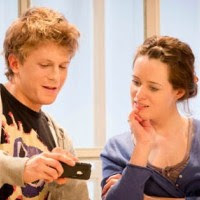 Bartlett has been experimenting with more epic storytelling in the last few years but as with his excellent, intimate Cock, a focus on just a handful of characters pays dividends in Love, Love, Love. The second act shows us the classic '80s/'90s family, Sandra (in a hilariously spot-on power suit) missing her daughter Rosie's (Claire Foy) violin recital, the family disintegrating on Rosie's 16th birthday. There's a dark, but excellently realised balance to this central act, as 14-year-old Jamie (Big Favourite Round These Parts George Rainsford) opens the act alone in the house, dancing excitedly with the Stone Roses turned up to eleven; by the end of the act the song's back on at the same volume, this time to block out family arguments. In the final act we see the long-term effects Ken and Sandra's attitude to life has had on their children, in a present-day scene (apparently in the original production this scene was set in the very near future; but it's taken so long to arrive in London that it's been overtaken and now takes place in the very recent past.) 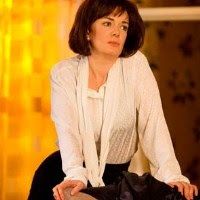 As sometimes happens I've got this far into a review and focused on the more serious themes without putting across just how funny the play is, but rest assured Bartlett has stuffed the play with excellent gags that puncture its central characters' pretensions and the preoccupations of their generation. The whole cast, who have to play their characters at various ages with the help of the odd well-styled, if not always that well-fitting, wig, are excellent and pull off the age difference between themselves and their characters (it's disturbing how convincing a 14-year-old George Rainsford makes at 30.) It feels unfair to pick Victoria Hamilton out of the cast but she really is outstanding from her first appearance, delivering some beautifully-timed lines and keeping an idea of the same Sandra however much the years may change her. The third act, which really digs into the idea of how much responsibility parents should take for how their children's lives turned out (Rosie thinks they should take all of it; Ben and Sandra think virtually none, despite the obvious psychological damage caused to Jamie by the central scene) is the weakest of the three: It's hampered somewhat by following the excellent middle act, and by Bartlett rather spelling out his central thesis a bit too much. None of the characters come off too well from the last we see of this family, but if Bartlett gives us a rather bleak, accusatory look at the generation who grew up in the sixties, he does so in style and is served by an excellent production with spot-on performances.

Love, Love, Love by Mike Bartlett is booking until the 9th of June at the Royal Court's Jerwood Theatre Downstairs (returns and day seats only.)