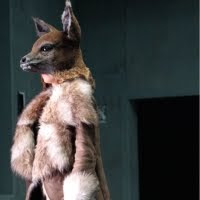 Simon Stephens' last premiere in this country, The Trial of Ubu, was notable for how much director Katie Mitchell's stylistic choices overshadowed Stephens' play as written. For the playwright's latest, Three Kingdoms, he once again puts a lot of faith in his director, in a multicultural production - the British writer is paired with a German director (Sebastian Nübling,) Estonian designer (Ene-Liis Semper) and a cast from all three countries (Estonians make up the majority of the cast, although English is the most-spoken language, with the rest surtitled.) The story appears at first to be a hard-boiled crime drama, as detectives Ignatius Stone and Charlie Lee (Nicolas Tennant and Ferdy Roberts) interrogate Tommy (Rupert Simonian,) a young man caught on CCTV trying to dispose of a bag. The bag turns out to contain a human head, belonging to a murdered Eastern European prostitute. The policemen try to find the man who paid Tommy to dump the bag, but the trail they end up following leads them first to Germany, then to Estonia, with each of the play's acts taking place in a different country.

Right from the start, it's clear this isn't going to remain a naturalistic investigation, as Nübling has added the character of a Trickster (Risto Kübar, pictured,) who opens the show with a mournful song, wearing a white suit that leaves nothing to the imagination. And if you can't tell what religion he isn't from that, he has a
FULL-FRONTAL MALE NUDITY ALERT! 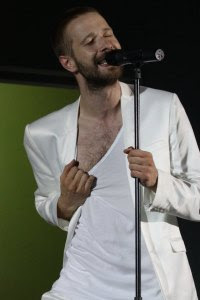 later on, as does Lasse Myhr. As the investigation goes on, and Stone is the only one unable to speak the language, his disconnection starts to take on surreal proportions that bear resemblances to the work of David Lynch - Three Kingdoms has a lot of the Twin Peaks about it, and the excellent Tennant sustains an increasingly frantic, desperate performance.

Three Kingdoms has had very mixed reviews in the UK (it debuted in Estonia and Germany last year) and I can see why people might really take against it, especially given its long running time (the first half is nearly 1 hour 50 minutes long so you may want to time your pee breaks accordingly and cut down on the pre-show drinks.) The delicate balancing act between eccentricity and pretentious gibberish is one I rarely find successful but this time, for me at least it hits the right notes. There's enough actual story, and Stephens actually gives the audience enough to think about with regards to the relationship between the European nations, that it doesn't come across as smugly enigmatic. Andy wasn't quite sure what he thought by the interval - he did admit his more obsessive-compulsive side was objecting to the mess, and all the bodily fluids and food ending up on (and off) stage (being in the second row of the stalls we were safe from getting gobbed on, but we did get splattered by bits of squashed cucumber in the second half.) But actually it was the final act, where the production really let rip into a dreamlike state that made him come down on the side of really liking it. 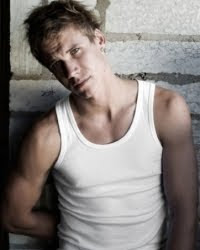 The show's (inconclusive) conclusion is again very reminiscent of Twin Peaks, with Lee disappearing entirely in the third act without explanation (judging by the Q&A afterwards, this may be more to do with Nübling having made massive changes to the two detectives, swapping great chunks of their roles around, rather than Stephens' original intention) and Stone having to face the identity of the mysterious White Bird. Overall this was memorable in the right ways (and no, not just because of the athletic Eastern European men boxing in vests - pictured is Rasmus Kaljujärv.) There's also people appearing on stage through walls or packed into suitcases, men with wolves' heads pursuing women with deer's heads, and one of the most highly sexual but least sexy scenes you're likely to see on a stage. And a look into the former Soviet bloc's sometimes complicated inclusion into Western capitalism that remembers to be entertaining and, in a good way, very odd.

In conclusion, I think Bob did it.

Three Kingdoms by Simon Stephens is booking until the 19th of May at the Lyric Hammersmith; then continuing on tour to Vienna.