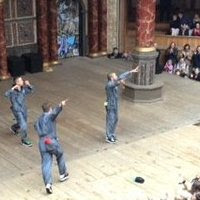 My second trip to Globe to Globe is for the US offering, the Q Brothers from Chicago who turn Shakespeare's plays into rap. Their take on Othello uses just five performers: Postell Pringle in the title role; Jackson Doran and adaptor-directors GQ and JQ (The Q Brothers) playing all the other parts; and Clayton Stamper DJ-ing on the musicians' balcony. Othello, Cassio and Iago are here members of a Hip Hop crew led by Othello who's enjoying the most personal success, partly thanks to the inspiration of singer, and now his wife, Desdemona. Some of the characters may have gone by the wayside, the handkerchief may have turned into a chunky gold chain, and a geeky Roderigo trying to impress Desdemona by selling off his Masters of the Universe action figures (Skeletor's still in the original packaging!) but the thrust of the story remains the same, lies and jealousy leading to murder and suicide.

The company's music had the Globe's diverse audience, from babies to grannies, throwing their hands in the air, while the witty lyrics combine the pop-culture references with quotes from the original play snuck in here and there. The show's mainly played for laughs with the all-male cast also taking on the female roles of Emilia and Bianca. Desdemona, meanwhile, doesn't appear onstage, and is represented instead as a beautiful singing voice that captivates Othello. Her murder is cleverly done in a breathtaking scene that's all the more impressive because of the party atmosphere and jokes that make up the rest of the show. The abrupt change of tone is managed perfectly, helped I think by the musical medium: By and large, each scene is a separate song, so shifting into an Eminem-style, dark rap ballad about domestic abuse shocks but doesn't jar, making for a chilling scene.

The nerdy characterisation of Roderigo, whose lines JQ raps as if through thick braces, meant I missed a lot of his jokes but that's pretty much splitting hairs as there's enough to enjoy regardless. This is an impressive, anarchic show that once again fits comfortably into the spirit of Shakespeare and of the Globe while offering something of its own identity, and which also uses its light touch to blindside the audience into getting sucker-punched by its darkest scene.

Othello by William Shakespeare in an adaptation by The Q Brothers is part of Globe to Globe, which continues until the 9th of June at Shakespeare's Globe.