PREVIEW DISCLAIMER: I seem to be having a run (ha!) of these at the moment. This one doesn't open to professional critics until next week. 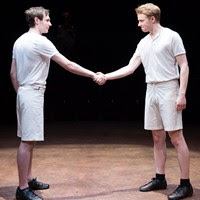 I didn't know what to expect from Chariots of Fire: On the one hand there's an exciting creative team, with Mike Bartlett adapting the film for the stage, Edward Hall directing and Miriam Buether doing one of her complete redesigns of a space, here turning Hampstead Theatre into an in-the-round, miniature athletics stadium. On the other hand, the project itself seems overly safe and cynical: An Olympic story in an Olympic year, with a double helping of nostalgia - for the 1920s when the story is set, and for the much-loved 1981 film. The publicity even reassures us that yes, the show does feature the iconic Vangelis theme music. The whole thing seems such a safe bet that a West End transfer was announced before it had even started previewing. So how will the story of two rival runners on the same team, a Jewish Englishman and a Christian Scotsman, translate to the stage?

Well the answer is: With decidedly mixed results. Buether's set, focused around a double revolve, is the show's biggest star. Tracks that run up and through the audience enable Hall's company to create a great variety of visually exciting ways to stage the races, and helps bring a sense of excitement and occasion. Harold Abrahams (James McArdle) is newly arrived at Cambridge where he makes a name for himself as a runner. As his name makes the papers, so too does that of Scottish minister's son Eric Liddell (perky-nippled Tintin lookalike Jack Lowden.) One immediately obvious problem is that we rarely see the two together - a story based on a rivalry that turns into respect doesn't work too well when we hardly see any rivalry or respect.

Much what makes Chariots of Fire disappointing on a storytelling level though, comes from the very fact of it being a true story. The play really wants to be a "Jew vs Christian" narrative, but it's mainly Liddell where this is relevant. We frequently see him being berated about wasting his time on running rather than missionary work by his joyless sister Jennie (a nice display of passive-aggressive potato peeling by Natasha Broomfield) and the story's main crisis arrives when an Olympic 100 metre heat is scheduled on a Sunday, and Liddell refuses to run. But while Abrahams' Jewishness draws the odd antisemitic comment, it's never when he's around, and his religion doesn't seem to factor into why he races. Of course the other place where reality provides a disappointing narrative is in the way the Sunday race conflict is resolved, denying the audience the confrontation the whole story has been building up to - a resolution which had it been made-up, would have unleashed my inner Annie Wilkes.

A large ensemble cast helps create the most memorable visuals of the show, with the races made up of a combination of actual running around the mini-stadium, and movement/dance routines, with mixed results: The Scotland vs France race meet just looks silly, but the introduction of the fearsome American team is impressively done and shows the levels of fitness the cast have had to reach for the show. The large cast does mean it's a struggle for supporting characters to make themselves known though. Nicholas Woodeson has some nice moments as Sam Mussabini, Abrahams' coach at a time when even having a sports coach was frowned upon by the English authorities (putting too much effort into actually winning being somehow unseemly) while Propeller regular Tam Williams is Lord Lindsey, turning up for races with a cigarette still in his lips, and memorably having to repeatedly jump a hurdle on a spinning stage. Tonight this really had the audience holding its collective breath as Williams had fallen over on one of the set's sharp turns just before jumping. (In fact there seems to be a collection of cuts and bruises among the cast, while other teething problems included the outer revolve crashing to a noisy halt, and the action having to be stopped for five minutes while it was repaired.) But the rest rather blend into the background, and as a result there's a number of attempts at emotional final scenes that don't stand much chance. As Andy (who was noncommittal at the interval but really took against the play in the second act) said, if the script needs to remind us that Aubrey (Mark Edel-Hunt) is the man we met at the start carrying the luggage, then we're unlikely to be moved by his final heart-to-heart with Abrahams.

With most of the cast opening and closing the show in Team GB kit as a none-too-subtle nod to its topicality, it's hard to argue that Chariots of Fire isn't just capitalising on London 2012. It does have a lot that's entertaining, and some good performances fighting to get through the mass of characters, but a lot of what's good about it is in the visuals and the design, so unless they're planning to do a Starlight Express to the Gielgud and run tracks round the circle, I'm not sure what'll be left to recommend the show once it makes it to the West End.

Chariots of Fire by Mike Bartlett, based on the film with a screenplay by Colin Welland, is booking until the 16th of June at Hampstead Theatre; then from the 22nd of June to the 10th of November at the Gielgud Theatre.