PREVIEW DISCLAIMER: Although this is a production I've already reviewed, this West End transfer doesn't get its second Press Night until tomorrow. 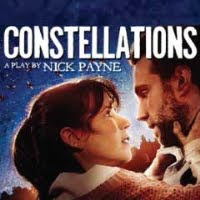 The third and final in the Royal Court's current season of transfers to the Duke of York's is the most recent, dating from the start of this year. Nick Payne's Constellations is also the only one of the trio to have originated in the smaller Upstairs Theatre, and I was interested to see how it coped with moving to a very different space from the one I'd originally seen it in. Michael Longhurst's production has come to the West End with its excellent original cast intact, and only minor alterations to Tom Scutt's set, other than the obvious change from an intimate in-the-round staging to a proscenium arch stage. Rafe Spall and Sally Hawkins are Roland and Marianne, whose romance is played out in Quantum Multiverse Theory.

The good news is a different kind of venue hasn't changed my opinion from my earlier review (which means I recommend going, and if you do I also say stop reading this review until you have. Christopher, who likes to swot up on shows before seeing them, thanked me for insisting he stay spoiler-free and experience Constellations with no preconceptions.) 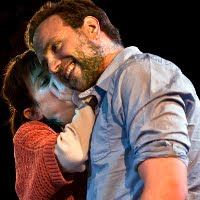 We were fairly near the stage so intimacy wasn't an issue, but I doubt it would be one further back anyway. (The Royal Court have closed the Duke of York's Upper Circle to avoid having audience members at too much of a disconnect from the action.) But Spall and Hawkins' performances, which are breathtaking in their energy and variety, are also warm, welcoming, and very, very funny - enough to keep you invested in their relationship and its multiple outcomes. But the skill with which Payne has constructed the rapidly-moving scenes is not to be underestimated either. (And losing the in-the-round staging has also had one major benefit: The lights no longer shine into the audience's eyes with the brightness or frequency they did in the Upstairs Theatre.)

Christopher was moved by the story's ultimate resolution, but he was also impressed by the skill and originality of the piece. Under the science, originality and writing skill is an almost childishly innocent, touching piece of wish-fulfillment, of how in the millions of possible universes the people we've lost and miss are still living on.

Constellations by Nick Payne is booking until the 5th of January at the Duke of York's Theatre.